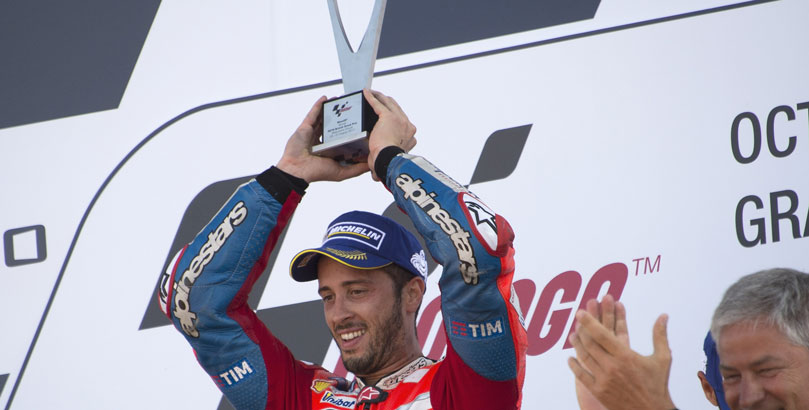 Marc Marquez will be keen to get back to winning ways at the San Marino Grand Prix after failing to finish last time out at Silverstone.

The Repsol Honda rider went out with a mechanical failure while challenging for the lead and will want to make up lost ground at Rimini.

Having looked at our San Marino MotoGP odds, Marquez is 3/2 favourite to win the race and repeat his success of 2015.

The Hondas certainly like the circuit with Marquez’s team-mate Dani Pedrosa winning the San Marino race last season, with the Spaniard fourth favourite at 6/1 to take successive wins at Misano.

Now that Yamaha and Ducati have adapted their bikes better to the Michelin control tyres, the race for the championship is a more even contest.

Movistar Yamaha’s Maverick Vinales is 9/4 for the race win with series points leader Andrea Dovizioso, the race winner at Silverstone, showing at 11/2.

One rider not on the start grid in Rimini will be home hero Valentino Rossi after breaking his leg in a training accident.

The Movistar Yamaha rider has undergone surgery and will miss the next two races at least, ending his hopes of landing an elusive 10th world title.

How the British Grand Prix finished:

Dovizioso reclaimed the world championship points lead with victory at Silverstone, taking over at the top of the standings after Marquez failed to finish the British Grand Prix.

Rossi was the early leader and looked well in control of the race until the latter stages.

But with team-mate Vinales, Dovizioso and Marquez in pursuit his position at the front of the leading group proved not to be a comfortable one.

In a rare DNF for the Repsol Honda team, it was Marquez who went out of the picture when his machine encountered a mechanical problem.

That left the Movistar Yamaha team-mates to battle it out with Dovizioso and it was the latter who eventually claimed the win, biding his time before picking off both Yamaha riders to lead home Vinales and Rossi.

The pace of the Yamaha duo certainly put them back in the championship reckoning with 26 points covering the top four until Rossi’s broken leg turned it into a three-horse race.

There was something to cheer for home fans at Silverstone as LCR Honda rider Cal Crutchlow finished fourth at his home race.

How much should clubs change their squads every year?
What do promoted teams need to do to survive?
Author