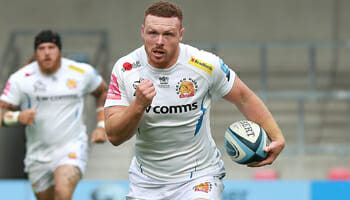 Racing 92 have lost in two of the last four Heineken Champions Cup finals and are again up against it when taking on Exeter in Bristol.

The Chiefs will contest their first European decider but are not expected to suffer from stage fright following great success at Premiership level.

Rob Baxter’s relentlessly-efficient side get the nod to win by 1-12 points at 13/10 for our opening Exeter vs Racing 92 prediction.

Exeter only made it into England’s top tier 10 years ago but their remarkable journey has seen them rise to dizzy heights.

The Chiefs have appeared in the past four Premiership finals and can’t be faulted for only winning one, losing out to a star-studded Saracens in the other three.

Loyalty and continuity have been the key ingredients to their success, with Baxter enjoying a 14-year playing stint with the club prior to taking charge in 2009.

Current England internationals Jack Nowell, Henry Slade, Sam Simmonds and Luke Cowan-Dickie are among those to emerge via the Chiefs’ development system.

Star recruits such as Stuart Hogg and Jonny Gray have been brought in to take them to the next level and Exeter now look ready to capture European club rugby’s biggest prize.

They brushed aside Northampton 38-15 in the quarter-finals and Toulouse 28-18 in the semis, while Bath were crushed 35-6 in last week’s Premiership play-offs.

Unlike most teams, the Chiefs score the majority of their tries through the forwards and Exeter vs Racing 92 odds.

The back rower struck in the win over Toulouse and touched down 10 times in the Premiership this term.

Big-spending Racing have to be respected after establishing a strong pedigree in this competition over the past few years.

Clermont were beaten 36-27 in a high-scoring shoot-out at the last-eight stage before Laurent Travers’ side showed they can also tough it out in the trenches with a 19-15 win over Saracens.

There are danger men throughout the back line, with winger Juan Imhoff, centre Kurtley Beale and full-back Simon Zebo among the most mercurial talents in the game.

However, we feel Exeter can outwork them up front, especially after a troubled build-up to this game.

Nine Racing personnel were confirmed as having Covid-19 a fortnight ago, resulting in the postponement of their Top 14 clash with La Rochelle.

The Parisians fielded a weakened XV for last Saturday’s home defeat by Toulouse and relocated their training base to Corsica this week to prevent another outbreak.

Scotland fly-half Finn Russell insisted: “It’s been good. The weather has been quite nice. It’s a nice hotel. It’s good for us to be away and to stick together as a team.

“Everyone is obviously very focused on the final and you can have a lot more interactions with each other, whether it’s small meetings or conversations about the final and training here.”

However, he admitted: “It’s been different. The start of this week has maybe not been 100 per cent but in the current climate we can’t complain too much. We’re in a hotel, we’re in a bubble.”

Lock Jonny Hill is another one of Exeter’s high-scoring forwards, having reached double figures in Premiership tries this term.

The 26-year-old scored in the quarter-finals of this tournament and 11/1 for him to touch down at any time here is rated great value in our Exeter vs Racing 92 betting tips.