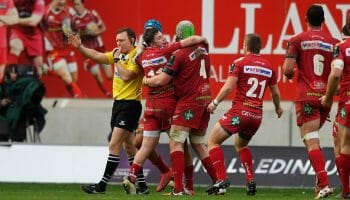 The Scarlets face a tough task when taking on Munster in the Pro 12 final at Dublin’s Aviva Stadium but could be a value bet on the handicap market.

The Welsh outfit have already come away from Ireland with one famous win when beating Leinster in the semis and are backed to at least go close in the decider too.

Punters can get 91/100 for the Scarlets with eight points start and that’s the way we’re siding in our Pro 12 final predictions.

After starting the regular season with three straight defeats, Wayne Pivac’s outfit went on to win 17 of their next 19 games, including when coming from 21-6 down at half-time to beat Munster 30-21 at Thomond Park in February.

They then carried that confidence into the play-offs by storming 21-10 ahead of Leinster at the break at the RDS, a venue they hadn’t won at in a decade.

That lead was built on some spectacular running rugby out wide, but the Scarlets also had the resilience to dig deep in defence after Steff Evans saw red just before the interval, eventually prevailing 27-15.

Wales hooker Ken Owens and lock Jake Ball will again be missing for the final due to injury, but this is an athletic side that is capable of causing problems all over the pitch.

“We believe that we can go all the way and we’re definitely not here to just make up the numbers,” declared centre Scott Williams.

Table-toppers Munster are eyeing a fourth title triumph after beating another Welsh side in the Ospreys 23-3 at the semi-final stage.

However, we believe the Irish province were greatly flattered by that scoreline, with a number of key incidents going their way.

Two of the home team’s tries came via breakaways after they had looked in trouble themselves and the visitors were denied a couple of scores by the TMO, albeit rightly so.

Obviously, the Scarlets will need to enjoy better fortune and face a big job trying to break down Munster’s strong defence.

However, Saracens’ 26-10 demolition of Munster at this venue in the European Champions Cup is still fresh in the memory and should give the Scarlets hope of an upset.