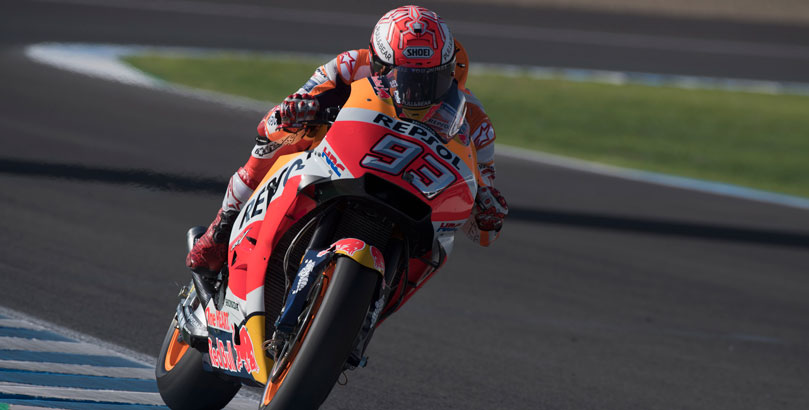 Marc Marquez might only have won one of the last six Italian MotoGP races but he starts Sunday’s race at Mugello as a hot favourite to make it four wins in a row this season.

The Repsol Honda rider has once again stamped his authority on this year’s championship and goes into the weekend at Mugello priced at 13/10.

Ducati’s Andrea Dovizioso, who has re-signed with the Italian manufacturer for 2019, needs to bounce back from his crash in France with a race win and will bid to make it successive race wins at the Italian GP.

The Italian is 5/2 to take the race win in his home race, with fellow Italian Valentino Rossi 5/1. Rossi’s Movistar Yamaha team-mate Maverick Vinales is 9/1.

Dovizioso could be joined by countryman Danilo Petrucci on the factory Ducati next season and is 14/1 to make it a home winner at Mugello.

Having crashed at his home race last time out at Le Mans, Frenchman Johann Zarco is only 18/1 to make up for it with a race win on the Monster Yamaha Tech 3 machine.

Former world champion Jorge Lorenzo will look to turn his early race pace into a victory at Mugello but the factory Ducati rider only comes in at 20/1.

The only thing in his favour is Lorenzo has won four of the last six races at this circuit.

But with his reputed £10million-a-year salary frightening off potential suitors for his signature, the Spaniard needs to start winning races again quickly if he is to have any hopes of remaining with the Italian manufacturer for next season.

Another rider keen to improve his performances is Italian Andrea Iannone who goes into his home race priced at 22/1 on the Ecstar Suzuki.

How the French Grand Prix finished:

Marquez showed again why he is so far ahead of his rivals by surviving the French Grand Prix which turned out to be something of a crash fest.

More than 100 crashes – a record for a dry GP weekend – happened in the three classes but Marquez showed his mastery of the art of racing a motorcycle by taking another comfortable victory.

The win extended his lead in the championship to 36 points as title rival Dovizioso slipped further back in the standings after crashing out of the race on his Ducati.

At least the Italian had the consolation of a new factory Ducati contract even though the identity of his new team-mate for next season remains unclear.

Present team-mate Lorenzo could only manage sixth in France despite again leading the early laps, with second-placed Petrucci edging Jack Miller in the stakes to replace the Spaniard at the full factory set-up next season.

Petrucci finished second in France ahead of Rossi and Miller, with Marquez’s team-mate Dani Pedrosa slotting in sixth ahead of Lorenzo.

Rossi’s team-mate Vinales was seventh ahead of the bravest, or most foolhardy, rider of the weekend in Cal Crutchlow. Having spent the night in hospital after landing on his back during a qualifying crash, the Honda rider raced steadily to a creditable eighth position.

There was no such consolation for home hero Zarco, who had a French Grand Prix to forget in front of his adoring fans at Le Mans.

Zarco has made himself a genuine title contender with a fine start to the season but just when he needed to apply the pressure to Marquez the Frenchman was the one to crack at the Bugatti Circuit as he crashed out of the race early on, taking hopes of a home victory with him.