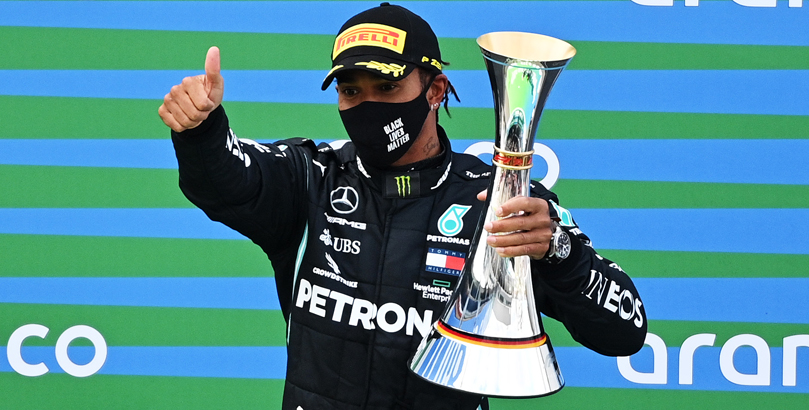 Lewis Hamilton will be all the rage to claim a record-breaking 92nd race victory of his incredible career in most Portuguese Grand Prix predictions.

The Briton drew level with Michael Schumacher when prevailing at the Eifel Grand Prix in Germany, crossing the line 4.4 seconds clear of Max Verstappen.

With Mercedes continuing to operate on a different level, Hamilton is a worthy favourite at 1/2 to oblige again at Portimao in the Portuguese Grand Prix odds.

“It is beyond my wildest dreams that I am here today having equalled that record and I just feel humbled by the moment,” said Hamilton. “It has not sunk in.

“Michael is, and always will be, a legend of the sport and I feel very honoured to have one of his helmets.

“Of course, I can set goals and I will continue to charge on and see what is possible.

“I love the sport, the smell of it, the whole aura and atmosphere it creates, and it is going to be difficult to let it go.”

Teammate Valtteri Bottas is next best in the betting at 13/4 but there are fears of him being hit by a grid penalty if a new power unit is needed following his early exit at the Nurburgring.

Verstappen is available at 7/2, but Red Bull’s recent upgrades will have to pay off for him to catch Hamilton on a circuit expected to suit Mercedes.

How the German Grand Prix finished

Carlos Sainz claimed fifth place for McLaren in Germany but admitted there were teething problems with a fresh package.

“I didn’t have a good feeling all weekend, or during the 60 laps,” said Sainz. “I never felt completely comfortable with the car, so we need to make sure we understand better the new parts.

“I have to be happy because I think we extracted the maximum, but the feeling with the car is so, let’s say, not good and I had so much graining, it’s difficult to accept.”

Sainz had failed to complete three of the previous four races, while teammate Lando Norris was 15th in Russia and then lasted just 42 laps last time out.

Such reliability issues make 17/20 for at least one McLaren driver to be out of the points at Portimao worth adding to our Portuguese Grand Prix betting tips.

Racing Point did impress at the Nurburgring, with Sergio Perez finishing fourth for the second straight race and late stand-in Nico Hulkenberg moving up from 20th to 10th.

Perez commented: “I’m a little bit frustrated because I felt the podium was ours if we didn’t have the safety car.

“Until that point, I was catching Daniel (Ricciardo) and he was on older tyres – so it was set up for a close battle for the podium in the final laps.

“But the car is performing well and we can be proud of our recovery. To finish P4 is a strong result and the team did a great job to go into a race full of unknowns.”

Perez deserves to pick up the ninth podium spot of his career sooner rather than later and 9/2 for him to achieve that feat here completes our Portuguese Grand Prix predictions.

Ireland vs Italy: Hosts expected to turn on the style
Arsenal vs Leicester: Gunners fancied to see off Foxes
Author

Super League Grand Final: Wigan to end on a high