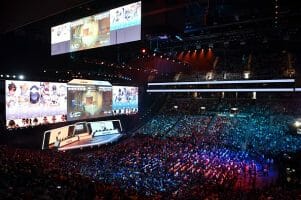 In 1997, id CEO John Carmack gifted his own Ferrari to the winner of a Quake Tournament, a player called Thresh. The gamer left such as a deep impression on the millionaire that he was awarded the highest valued winning prize of the time. Was this perhaps the very first instance of an esport gamer treated as a celebrity?

Now there are talks of esports featured in future Olympics, from Overwatch and Fortnite, to Heroes of the Storm and League of Legends (LOL); games that bwin already offers. Esports is already considered a legitimate sport by many; it’s a rapidly growing sports industry where after 2 years a player is considered a veteran, and by the time you’re 21 you’re too old.

The influence of competitive online gaming was first prominent in Asia, especially South Korea, where the 2018 League of Legends World Championship filled to capacity the Incheon stadium; the enthusiastic reactions of 50,000 people resembling a football World Cup Final. Other industries also grew around the gaming phenomenon including merchandise, sponsorships, and cosplaying. But now esports has grown beyond Asia’s borders and has emerged as a global phenomenon.

Renowned football teams such as Paris Saint Germain, Manchester City, and our very own Valencia have already formed their own professional esports teams. The hours a professional gamer spends training are comparable with the schedules of soccer and NBA players, with 12 to 18 hours a day focused solely on training. With thousands of gamers emerging worldwide, the competition is stiff and players need to keep up their winning records since their position is almost never ensured for long.

Several esports teams have been formed around various online competitive games including Dota 2, FIFA, Starcraft 2, Hearthstone, Counter-Strike: Global Offensive (CS:GO), Call of Duty, and PlayerUnknown’s Battlegrounds (PUBG), with the number of players constantly increasing. Top esports teams such as FaZe Clan, OpTic Gaming, Cloud9, and Fnatic already have millions of followers on social media, with tens of millions on lifetime earnings and sponsorship deals. Some of the top players in the world right now such as Faker of T1 and Johan “N0tail” Sundstein of OG have career winnings of over 1 million, showing the evolution of competitive gaming in just a decade; prizes in tournaments around 2010 were typically mere character figurines.

When people like Michael Jordan, Drake, and Mark Cuban have already invested in esports, the value of the sport becomes clear – as well as the belief that its reach will keep growing for years to come. With the popularity of streaming platform Twitch, the numbers of viewers of online gaming rapidly increased setting unprecedented growth for the industry that went hand-in-hand with an increase of the prize money offered for competitive tournaments. In 2019, more than 215 million dollars were awarded in winnings across 4,600 tournaments. With games like FIFA having sold over 260 million copies worldwide and League of Legends’ reported monthly player count being over 80 million, the continuous global growth of online games is not that big a surprise.

The first Fortnite World Cup in 2019 offered a prize pool of 100 million dollars with single tournaments recording over 200 million viewers. Major tournaments are becoming commonplace and keep attracting bigger and bigger viewership, such as the League of Legends World Championship, the League of Legends European Championship (LEC) Finals, the Call of Duty World League (CWL), the Overwatch League 2020, and the PUBG Global Championship. Keep an eye out for bwin’s betting odds on the eEURO 2020 with 55 national teams fiercely competing on Pro Evolution Soccer 2020 (PES 20), and the fierce Finals scheduled for the 23rd and the 24th of May 2020.

As of 2020, the estimated value of esports betting is over 30 billion dollars while in 2019 total wagers on esports reached close to 8 billion dollars. The wide variety of games means plenty more betting opportunities. For example, in LOL you can bet on the team to win at least one map, in shooters you can predict the number of kills, while in FIFA you can bet like you similarly would on live soccer games including half-time score and the team to score first.

The attractiveness of esports betting comes from its fast pace and the radical changes within seconds which means constantly updated odds; an exciting challenge for punters. Multiplayer online battle arena games (MOBAs) such as League of Legends and Dota2 are presently the most popular esports recording the biggest tournaments, the best paying events, and the largest communities with First-person shooters (FPS) such as Counter-Strike: Global Offensive and Call of Duty closely behind. You shouldn’t confuse esports with virtual sports, as the latter are virtual sporting events such as soccer, tennis, and horse racing run by computer simulations.

Join the millions of punters from all over the world that already enjoy the fastest rising activity that is esports and further expand your betting options.