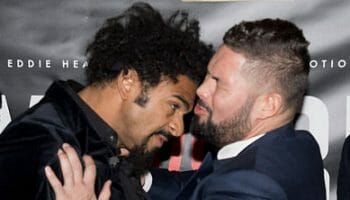 David Haye has not hidden his animosity towards Tony Bellew in the build-up towards Saturday’s much-hyped clash at the O2 Arena and the Londoner is strongly fancied at 9/50 to inflict a brutal defeat on his opponent inside the distance.

Both fighters have helped to promote this weekend’s bout by having plenty to say about each other and an explosive encounter looks very much on the cards, but Haye is ultimately expected to prove a class apart from the Merseysider.

The Hayemaker followed up a fine amateur career by going on to establish himself as the world’s best cruiserweight in the paid ranks, securing impressive wins over highly-rated Frenchman Jean-Marc Mormeck and Enzo Maccarinelli, of Wales.

The search for a fresh challenge and bigger pay-days then inspired Haye to step up to heavyweight and resulted in a defeat of giant Russian Nikolai Valuev to claim the WBA title.

After a couple of successful defences, taking on Wladimir Klitschko in July 2011 proved a step too far in that division and prompted Haye to hang up his gloves.

After returning to the ring 12 months later to defeat Dereck Chisora, Haye was out of action for another three and a half years before starting a second comeback with swift defeats of two low-key opponents.

A lack of elite-level activity in recent years has raised concerns that Haye could tire if his bout with Bellew lasts beyond the halfway point of the 12 scheduled rounds, but the 36-year-old favourite is confident that theory will not be put to the test.

“I am really going to destroy Tony Bellew,” declared Haye, who has labelled his foe as a “yapping Chihuahua”. Referring to his advantage in size and power, the Londoner added: “He’s the weight below me. I’m a heavyweight, looking at the heavyweight title.”

All bar two of Haye’s wins have come by stoppage and we can’t see Bellew standing up to his powerful punching, so 13/2 for the favourite to strike as early as round two appeals, with 6/1 for round three worth a saver.

Bellew seemed destined to fall short of winning a world title when suffering defeats to Nathan Cleverly and Adonis Stevenson in the light-heavyweight division, but stepping up to cruiserweight proved the making of him.

The Everton fanatic secured the WBC crown when beating Ilunga Makabu at his beloved Goodison Park last year, but had to get up off the floor in the opening round to do so – and that hardly augurs well for now fighting at heavyweight.

Bellew may be stronger and more experienced than when stopped in six rounds by Stevenson back in 2013, but it will still be a major surprise if he can handle Haye’s superior strength and this could be all over once the first big shot lands. 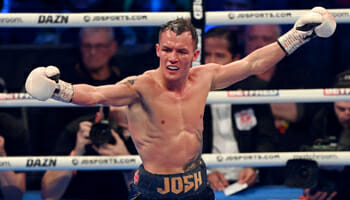