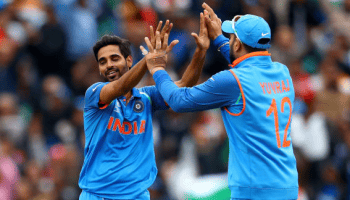 Few predicted Bangladesh would reach the ICC Champions Trophy semi-finals and it will be a major surprise if they get past India at Edgbaston on Thursday.

The tournament outsiders pulled off a famous win when successfully chasing down a target of 266 against New Zealand in Cardiff in their final Group A fixture.

Having slipped to 33 for four, Shakib Al Hasan and Mahmudullah both hit centuries in a 222-run fifth-wicket stand to see off the Kiwis and send their supporters wild.

However, they had previously been hammered by England and were saved by the rain when taking on Australia, so 31/10 isn’t enough to tempt us into backing another upset in our Bangladesh vs India betting tips.

The minnows trail 26-5 in head-to-head meetings in this format, with only one of their victories coming outside of Dhaka.

India were solid throughout the pool stage, easily accounting for Pakistan and South Africa either side of being slightly unlucky to catch Sri Lanka’s batsmen on a good day.

There are some concerns about India’s lack of ambition when batting first, but that methodical approach means they rarely post poor totals.

With a well-balanced bowling attack to back them up, Virat Kohli’s side have performed consistently at major tournaments since lifting this trophy four years ago.

That measured approach also makes 17/20 for under 10.5 sixes in this match stand out from the Bangladesh vs India odds for two reasons.

If Bangladesh are put in first, they could well wilt under pressure and cause this to be a low-scoring affair, like when there were only five maximums in India’s defeat of South Africa.

If India get to set a total, the feeling is that there will again be no gung-ho policy until the closing overs – and only then if a solid platform has already been established.

When these teams met in a three-match series in Dhaka two years ago, India hit 10 sixes and Bangladesh nine across all the games, with the most in one encounter being eight.