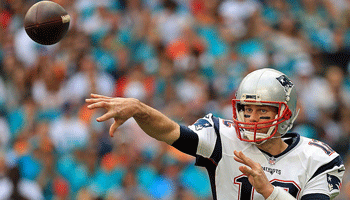 While the NFC looks wide open between the final four, the AFC has a clear favourite, two contenders and one obvious rank outsider.

The New England Patriots are as short as 11/20 to make it through to their seventh Super Bowl in 16 years, a staggering achievement in a league where the parameters promote parity. The Pats have home advantage, a head coach and quarterback combo used to winning in these post-season situations and the luxury of a first play-off game against an opponent they have frequently demolished in recent times.

Tom Brady’s New England have a 7-1 overall record against the Houston Texans, who they face at home this weekend. Houston’s four games in Foxborough have all ended in defeats – by margins of 40-7, 42-14, 41-28 and 27-0 – and their most recent loss came against the Patriots’ third-string quarterback, not that man Brady. At 25-1 to win the AFC, the Texans can be discounted because all signs point to their play-off run ending this weekend.

New England may be considered a safe bet here but the odds offer little in the way of returns, so consider backing one of the two teams in the other Divisional Round contest, where the Pittsburgh Steelers visit the Kansas City Chiefs.

The latter, at their fearsome home in that match-up, are an excellent team but the jury remains out on if they can make the leap to a great team, something which they will only prove this month by finding a way past Pittsburgh and, probably, New England.

The signs are that this Chiefs outfit is different to those of previous years, where a lack of offensive firepower has been their Achilles heel. Speedster Tyreek Hill is a game-changer, Travis Kelce is the best tight end in the league not named Rob Gronkowski and Jeremy Maclin’s return is welcome.

However, if there is one team capable of toppling New England right now, surely it is the Steelers? Mike Tomlin’s men are on an eight-game winning streak and their offensive juggernauts Le’Veon Bell and Antonio Brown are at the peak of their powers. Throw in quarterback Ben Roethlisberger, a two-time Super Bowl champion whose record in the play-offs is a healthy 12-6, a brilliant offensive line and an improving defence largely built on impressive youngsters but led by 38-year-old lynchpin James Harrison and you have the ingredients of a Super Bowl side.

Pittsburgh will have to do it the hard way by winning in Kansas City before a likely trip to New England but they have got hot at the right time and have the right blend of experience and youth to punch their ticket to Houston next month.