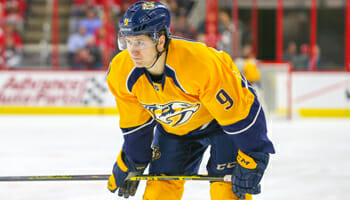 Nashville were beaten 6-3 in Montreal a couple of weeks ago but are fancied to gain revenge in the return fixture at Bridgestone Arena.

The Predators have a solid 7-5-0 record on home ice while the Canadiens are not travelling well this term, going 2-9-1 on the road.

Punters can get 1.8 for the hosts to prevail in regular time and that heads our Nashville Predators vs Montreal Canadiens predictions.

Nashville have come out on top in half of their six fixtures since that setback in Canada, notably thrashing Columbus 6-0 at this venue on Tuesday.

Thursday brought a 2-0 loss to Boston here but it was not for the want of trying, with the Preds firing in a season-high 42 shots.

“I thought we did generate a lot of offensive-zone time, a lot of pressure, a lot of grade-A chances, but we weren’t able to capitalise.

“For the most part, we probably deserved better than a shutout but we didn’t find a way to do it. The end result is what we got.”

Filip Forsberg is still on a good run of six goals in five games while Mikael Granlund has provided five assists during that time.

We’re not ready to desert Nashville yet and like NHL odds.

Montreal have lost four of their five matches since seeing off Nashville, going down 4-1 at home to Colorado on Thursday and being jeered by their own fans.

“It’s tough to get booed but the fans want to see wins, and they’re used to productive teams, and we’re not doing that right now,” said Nick Suzuki.

The Canadiens are second from bottom in the Eastern Atlantic division and dealing with issues on and off the ice.

A new General Manager is not expected to be brought in until after Christmas and injury problems are mounting among the playing strength.

Josh Anderson is set to be sidelined for two weeks after coming off versus the Avalanche while Brendan Gallagher and Sami Niku are out due to Covid regulations.

Defenceman Jeff Petry will miss this trip, with Corey Schueneman called up from the AHL’s Laval Rocket.

Forward Laurent Dauphin has also stepped up from that outfit, with Mike Hoffman out since November 13 – although he did practice on Friday.

Only one team has conceded more second-period goals than Montreal, whereas Nashville are down in 17th on that list.

Let’s add 2.2 for the Predators to win the middle stanza to our NHL predictions.