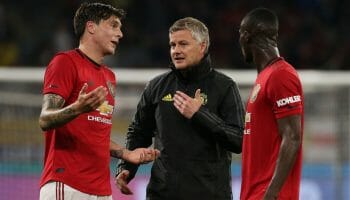 Manchester United should get past League One Tranmere in the FA Cup fourth round but are unlikely to have things all their own way at Prenton Park.

An old-fashioned muddy pitch and opponents who like to get the ball into the box is a combination which could give the Red Devils some uneasy moments.

However, the Premier League side’s class can ultimately tell, so we like 7/4 for an away win and both teams to score for our initial Tranmere vs Man Utd prediction.

Tranmere are languishing in the bottom three of their division after Saturday’s 2-1 loss to Ipswich here left them with just two points to show for their last five league outings.

However, Micky Mellon’s men have certainly been up for the cup, scoring goals for fun in this competition.

Rovers won 2-1 at Wycombe in a replay after drawing 2-2 at this venue and then hammered Chichester 5-1 on Merseyside.

A third-round exit seemed inevitable when they trailed 3-0 at half-time when visiting Watford, but Paul Mullin’s 87th-minute penalty ended up securing a stunning draw.

The Hornets then sent a much-changed team to Birkenhead on Thursday, two days after facing Aston Villa in the top flight, and Tranmere took advantage.

Looking ahead to the United clash, Mellon said: “They are an unbelievable football club and we are at the bottom end of League One, but we are going to give it everything we’ve got.

“We will try to represent the club again and the players will run their socks off again – and who knows?”

It may take the visitors some time to adjust to this surface, so Tranmere vs Man Utd odds.

United are under all sorts of pressure following back-to-back 2-0 defeats against Liverpool away and Burnley at home in the Premier League.

However, the Red Devils are still as high as fifth in the table and have been very professional in cup competitions this term.

As well as reaching the knockout stages of the Europa League, Ole Gunnar Solskjaer’s side are in the EFL Cup semis and did well to knock out Wolves in this tournament.

Injuries to star duo Marcus Rashford and Paul Pogba, plus emerging force Scott McTominay, have hurt United, but Solskjaer has been given a double boost at the back.

Victor Lindelof is available after illness and Eric Bailly could return from a knee injury, despite that seeming a risk on such a poor pitch.

“You’ve got to take the criticism at this club,” said Solskjaer. “You’ve got to be stronger mentally, probably, than anywhere else in the world.

“I feel I am and the staff I’ve got with me, they’re very strong mentally, so we’re sticking to what we believe in and I’ve got full faith in what we’re doing.”

This is a great tie for the FA Cup romantics and even Merseyside’s poor relations will be fired up for a possible upset.

However, we’re going for the Red Devils to weather any storms and prevail 3-1 at 21/2 to finish off our Tranmere vs Man Utd betting tips.