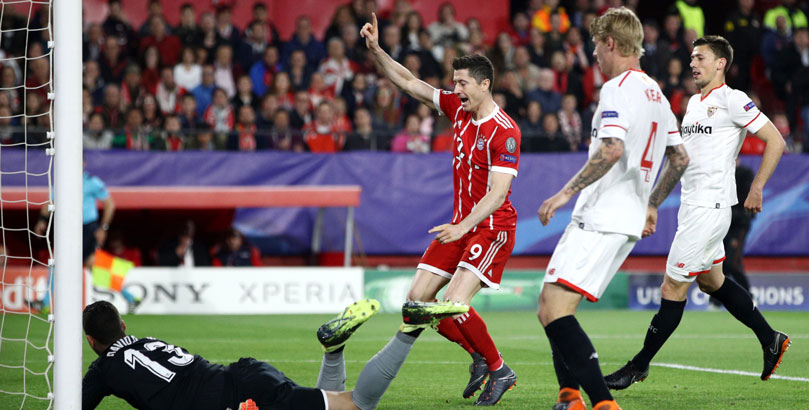 Bayern Munich are in pole position to reach the Champions League semi-finals following a 2-1 win at Sevilla, but the Spanish side showed enough to suggest they can be competitive in Germany.

If the LaLiga outfit can be just as positive in the return fixture, 17/20 for both teams to score appeals for our Bayern Munich vs Sevilla betting predictions.

Bayern have won 21 of their last 22 European matches at Allianz Arena, so it is hard to oppose them again in the second leg.

Both of their goals in Spain came via heavy deflections, with Franck Ribery’s cross going in off Jesus Navas and then Thiago Alcantara’s 68th-minute header diverting in off Sergio Escudero.

Mats Hummels commented: “I think the result would have gotten our signature if you gave it to us before the game.

“So, we’re very happy about the result and about most parts of the game as well, but it wasn’t 90 minutes of good from us.

“There was at least half an hour in the first half when Sevilla were clearly the better team and had good chances to score maybe a second goal.

“So, we know there’s a lot we have to improve on in the next game, and hopefully in the games coming after that.”

However, don’t forget that Bayern have now won seven straight games in this competition since replacing Carlo Ancelotti with Jupp Heynckes.

That hot streak includes a 3-1 triumph over PSG at this venue and a 5-0 demolition of Besiktas.

Looking at the Bayern Munich vs Sevilla odds, we were on FC Hollywood to win and both teams to score in the first leg and like 31/20 for a repeat outcome.

Sevilla coach Vincenzo Montella admits the Andalusian outfit have a mountain to climb in Munich but he is not throwing in the towel yet.

He declared: “We’re going to play with the same amount of pride, or more. Things are made possible if you believe and I continue believing.”

That positive first-leg performance came after an encouraging 2-2 draw with Barcelona in LaLiga and Sevilla have also shown some improved form on the road in Europe this term.

Montella’s side have had mixed away results, but they can take heart from a 2-2 draw at Liverpool during the group stage and a 2-1 win at Manchester United last month.

Bayern should ultimately be just too strong on home turf, but we don’t think they’ll enjoy an easy ride into the last four.

We’re finishing off our Bayern Munich vs Sevilla betting tips by taking 15/2 for the German giants to shade it 2-1 again.