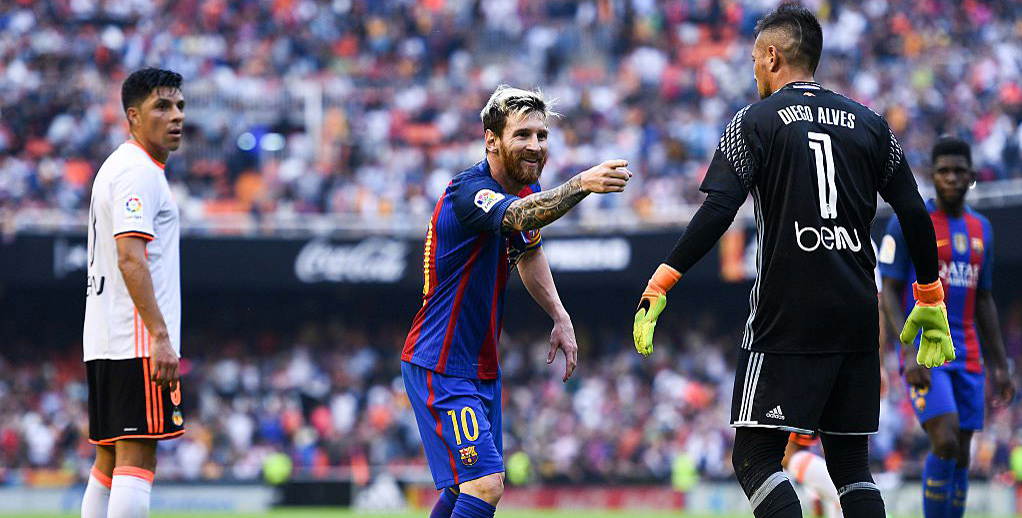 Valencia have claimed La Liga upsets against Barcelona at Camp Nou in two of the last three seasons and will again seek to belie their big odds there on Sunday night.

Barca will be determined to get their title bid back on track after suffering a shock loss at Deportivo La Coruna a week ago, but they needed a last-minute Lionel Messi penalty to win 3-2 at the Mestalla in October, so know this weekend’s opponents are dangerous.

After an amazing 6-1 Champions League defeat of PSG, Barcelona were brought back down to earth with a bump when edged out 2-1 by Deportivo, with that result allowing arch rivals Real Madrid to leapfrog them at the top of the table.

Luis Enrique refused to use the European hangover as an excuse, while Luis Suarez, who scored at Riazor, preferred to focus on looking forward, declaring: “There’s a lot of league action left and we’ll battle to the end. It’s not easy to win La Liga, but we aren’t going to let our guard down.”

Barca also struggled to shade Leganes 2-1 after the first leg against PSG, but in between those fixtures, with no Champions League distractions, they beat Atletico Madrid away and hammered Sporting Gijon 6-1 and Celta Vigo 5-0 on home turf.

A fully-focused home team should be too strong for Valencia. We like odds of 91/100 for Barcelona to win by more than two clear goals.

Valencia looked set to turn around a disappointing campaign when winning three of four La Liga games last month, with those victories including a 2-1 defeat of Real Madrid, but there has been more mediocrity so far in March.

Los Che had their limitations cruelly exposed when beaten 3-0 at Atletico Madrid, with Antoine Griezmann and Kevin Gameiro tearing them apart at the back, and they then needed a late equaliser from Munir El Haddadi to scrape a point at home to second-from-bottom Sporting Gijon.

The visitors can give it a go at Camp Nou ahead of the international break, but we think they will struggle to handle Suarez, Messi and Neymar, with the Brazil ace back after missing the trip to Deportivo and seeking his 100th goal for Barca.

A correct score of 4-1 at 11/1 could be the value bet from the Barcelona v Valencia odds.