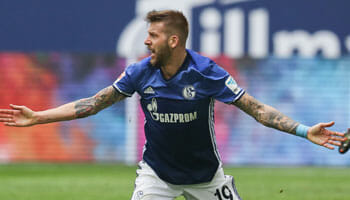 Ajax have been in great form at Amsterdam ArenA and will look to make home advantage count in the opening leg of their Europa League tie against Schalke.

The visitors have struggled to make an impact in Germany’s Bundesliga this term but they will be able to call on former Ajax and Holland forward Klaas-Jan Huntelaar.

However, after a run of five straight home wins in this competition, the first of our Ajax vs Schalke betting tips is to back the hosts at 29/20.

Ajax closed to within a point of Dutch Eredivisie leaders Feyenoord when storming to a 5-1 victory at Nijmegen over the weekend, with Bertrand Traore hitting a double in that third straight domestic triumph.

The Burkina Faso midfielder, on loan from Chelsea, was also on target when the Amsterdam giants overturned a 2-1 first-leg deficit by beating Copenhagen 2-0 here in the previous round.

With six goals in 13 games since helping his country finish third at the Africa Cup of Nations, the 21-year-old is clearly playing with confidence right now and will be one to watch out for in this tie.

Traore can be backed at 7/4 to score at anytime and is 11/2 to break the deadlock.

Schalke are only 10th in the Bundesliga, due largely to their moderate away record, winning just two of 13 road games in Germany’s top flight and scoring a disappointing 10 goals in those fixtures.

The January capture of Austria striker Guido Burgstaller has given them a boost, with the 27-year-old netting eight times so far, including a brace in Saturday’s useful 4-1 defeat of Wolfsburg.

The 27-year-old had previously been in prolific form for Nuremberg in Bundesliga 2 and can boast strikes against PAOK Salonika and Monchengladbach in the last two rounds of this tournament, so he could be a threat at 7/5 to add to his decent tally.