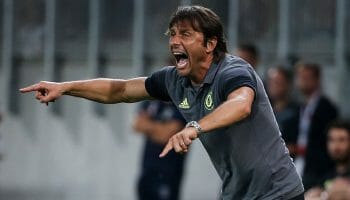 April is traditionally when titles and relegation battles are decided. A strong finish to the season can make the difference between glory – or relief – and disappointment, but some teams are better suited to the pressure than others.

In the graphic below we have looked back at each club’s record over the previous 10 seasons and calculated how their results in April differ from the rest of their campaign.

The chances of anyone catching Chelsea in the title race look to be pretty slim, with the Blues having claimed an average of 0.32 more points per game during April in the last decade than in other months of the season.

This is the best improvement of any current Premier League team and with nearest challengers Tottenham suffering one of the worst dips in this month, history suggests that Antonio Conte’s first season in England will be a successful one.

While Chelsea look certain to return to the Champions League next season, the absence of Manchester United could well continue if their results in April in recent years are anything to go by.

The 0.25 fewer points they have claimed per match at this stage over the last 10 years is the largest dip of any current top-flight side, suggesting that a late surge into the top four may be beyond them.

The respective records of Real Madrid and Barcelona in April means that Los Blancos’ five-year wait for a league title should soon be over.

While Barca have triumphed in three of the last four LaLiga seasons, Real have three points and a game in hand and tend to fare far better in April.

No current top-flight Spanish team has a better points-per-game improvement than the leaders, while their Catalan challengers have suffered one of the worst dips in form during this month.

The German title looks to be heading to Bayern Munich once more but plenty could change beneath them if Borussia Dortmund achieve another impressive finish. Thomas Tuchel’s side have taken over half a point more per match in April than other months during the last decade so it is easy to imagine them improving on their current fourth place.

At the bottom of the table, both Hamburg and Wolfsburg should be looking over their shoulders given their traditionally poor results in April. Both are within a point of the bottom three as it stands, so a similar deterioration this time around could result in relegation.

Juventus are yet another league leader whose ability to handle the pressure of a run-in looks set to deliver another title. Nobody in Serie A has enjoyed a bigger April improvement, which means their current six-point cushion should be more than sufficient insurance.

Below them, the typically poor performances suffered by Lazio – in contrast to the modest improvements registered by the two Milan clubs – should provide some late drama in the race for European qualification.

Two of the three biggest April improvements among the current occupants of Ligue 1 have been delivered by the current top two, which sets an encouraging precedent for a thrilling end to the title race.

There could also be drama at the bottom of the table where Caen’s traditionally poor showings in April will be a source of encouragement to the clubs just beneath them in the relegation zone.