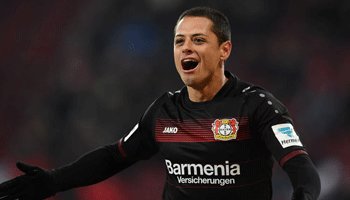 Atletico Madrid needed a penalty shoot-out to knock out Bayer Leverkusen at the last-16 stage of the Champions League two years ago but the Spanish outfit are fancied to progress in a smoother fashion this term and appeal at 23/20 for a first-leg win in Germany.

Diego Simeone’s side have established themselves as a genuine European powerhouse by going on to reach two of the last three finals, only losing out to city rivals Real on each occasion, whereas their opponents have never made it past this point.

Bayer Leverkusen were unbeaten in their group but only managed two wins, a 1-0 defeat of Tottenham at Wembley and a 3-0 home victory against Monaco when the French team had already wrapped up top spot and clearly rested on their laurels.

Other draws with Spurs and CSKA Moscow at the BayArena make far less impressive reading and they have also slipped from a rock-solid third in the Bundesliga last term to just a mid-table berth this season.

Roger Schmidt’s men have lost half of their last eight domestic league games at this venue and it is hard to see them breaking down a well-drilled Atletico defence, even if lone striker Javier Hernandez has put a 16-match goal drought behind him with a decent few weeks.

Much to Arsenal’s subsequent dismay, Atletico Madrid were impressive winners of a group that also contained Bayern Munich, securing five straight victories before being edged out 1-0 away to the German champions in the final round of fixtures.

That was one of only two goals Atletico conceded, having previously claimed 1-0 triumphs over PSV in Holland and Rostov in Russia on their travels, while they are also on course for another top-four finish in Spain’s ultra-competitive Primera Division.

There have never been any frills about Simeone’s team or tactics but this is simply a hard-working unit that gets the job done in a clinical manner, so we’re hoping that trend continues and are taking 11/5 they win to nil and 5/1 for a correct score of 1-0.