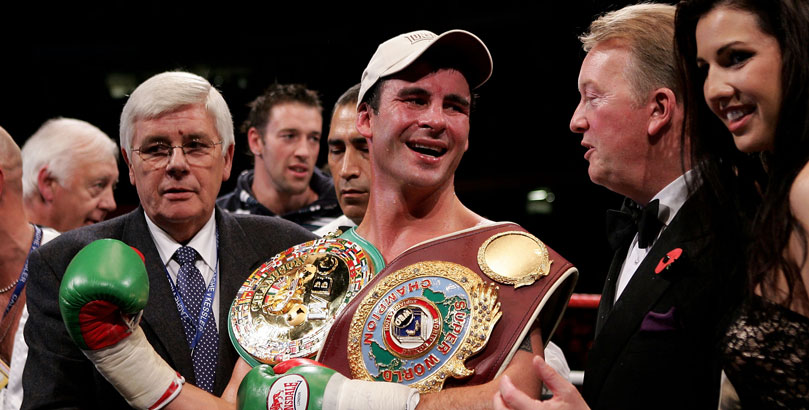 With several high-profile fights postponed due to the coronavirus pandemic, fans of British boxing will be impatiently waiting for the sport to resume.

A heavyweight unification fight between Tyson Fury and Anthony Joshua would elevate the winner to legendary status, but how do their exploits compare with the British champions from previous eras?

We’ve analysed every British world champion to have held a belt from one of the four main sanctioning bodies to reveal which has been the most successful in the history of the sport.

Using a simple scoring system, awarding a point for each belt won and each successful title defence, Joe Calzaghe narrowly edges out Lennox Lewis 26 to 24.

Lewis won a heavyweight title on three separate occasions, but Calzaghe’s dominance of the super middleweight division – including 22 successful defences – sees him top the list.

Featherweight legend Naseem Hamed is the only other British boxer to reach 20 points, although Chris Eubank is on 19 ahead of Joshua in fifth.

The best in each weight category

There are 17 weight categories so to keep things simple we’ve combined each ‘tweener’ division with whichever of the eight ‘glamour’ divisions is immediately above it.

Lewis is the UK’s most successful boxer at the heavyweight and cruiserweight level, having won 44 of his 46 professional fights and spending almost 4,000 days as a champion combined.

Across light heavyweight and super middleweight there’s no beating Calzaghe – literally as he also fought 46 times without a single defeat.

While British boxing has tended to focus on the heavier divisions, Hamed’s rise to featherweight champion at just 21 years old is worthy of a mention, as are his 36 wins from 37 professional contests.

Which belts are the most British?

While the heavyweight division tends to attract the most attention, fans of British boxing have plenty of other options.

The UK has produced a world champion in every single one of the 17 weight categories and there is one which stands out.

The four super middleweight belts combined have been held by a British boxer for 30% of their existence, thanks not only to Calzaghe but also the likes of Nigel Benn and George Groves, who each spent more than a thousand days as champion.

Brits have given a good account of themselves in the heavyweight and featherweight divisions too, with roughly one day in every week on average seeing a UK-born fighter as the reigning champion.