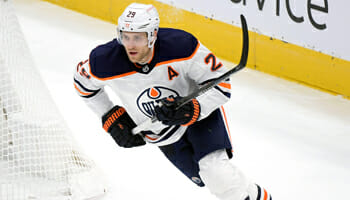 Washington put a lot into last night’s 5-4 victory at Calgary and that could open the door for Edmonton to pick up a much-needed success.

The Oilers have gone three games without a win but did beat the Capitals on the road last month and can come out on top again on home ice.

We’re going with 2.2 for the hosts to get the job done in regular time in our Edmonton Oilers vs Washington Capitals predictions.

Edmonton are just below the wild card spots in the Western Conference after going down 3-1 at Calgary on Monday.

Devin Shore gave the Oilers hope of a fightback when replying to Tyler Toffoli’s brace but Johnny Gaudreau settled the issue late on in the third period.

Jay Woodcroft will now be determined to make the most of a five-match homestand in a bid to boost their playoff hopes.

The head coach has targeted improvement in power play positions and said: “We had a few chances, but not at the level we wanted to create.

“I don’t think our power play yesterday was a momentum generator for our team – and a key factor in us not winning the game was the frustration that we felt on it.”

Goalie Mike Smith is still sidelined by illness but Evan Bouchard has recovered from the same stomach bug and will be welcomed back.

Edmonton must be more positive going forward, so NHL odds.

Washington finished February with three straight defeats but have started this month with a much happier hat-trick.

The Capitals followed up home wins over Carolina and Seattle by shading Calgary 5-4, with Alex Ovechkin hitting a double to reach 766 career goals.

Ovechkin joined Jaromir Jagr in third place on the all-time list, now only behind Gordie Howe (801) and Wayne Gretzky (894).

“It’s pretty big and being with those names and in this company, it’s a pretty cool moment.”

However, rallying from 2-0 down and winning the third period 3-2 took a big effort from Washington and we fear they may be a touch weary here.

Let’s add 7.5 for a home win by exactly two goals to our Edmonton Oilers vs Washington Capitals predictions.