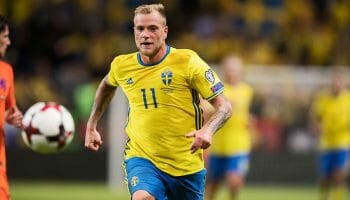 Norway and Sweden are both coming off positive World Cup results, but the visitors look to have more momentum going into Tuesday’s international friendly.

Sweden have won 58 of 105 previous encounters with their Scandinavian neighbours and can further enhance that record with another success in Oslo.

Janne Andersson’s side are on a bit of a roll and get the nod at 3/2 in our Norway vs Sweden betting tips.

Norway showed plenty of spirit to come from behind and draw 1-1 with the Czech Republic, with Alexander Soderlund blasting in a penalty after the lively Tarik El Younoussi had been brought down on the break.

That Saint-Etienne and Olympiacos pairing give Lars Lagerback a nice combination going forward, but the defensive frailties that have left them in fifth place in Group C were again evident.

Norway haven’t kept a clean sheet in six qualifiers, with Northern Ireland beating them 2-0 and even San Marino scoring in a 4-1 Oslo loss.

Looking at the Norway vs Sweden odds, 9/2 for an away win and both teams to score stands out.

Sweden climbed to the top of Group A after edging out France 2-1, with Jimmy Durmaz equalising just before half-time and then Ola Toivonen pouncing on a poor Hugo Lloris clearance to strike from long range in the 93rd minute.

That result continued a fine run of form for Andersson’s men, who thrashed Belarus 4-0 in their previous World Cup qualifier in between a 6-0 friendly win over Slovakia and a 3-2 success in Portugal.

The goals have been spread around this athletic outfit, which is now strong enough to see Sunderland midfielder Seb Larsson and Celta Vigo striker John Guidetti reduced to substitute roles against Les Bleus.

Guidetti may get more of a chance to shine here, though, and 9/4 for him to score at any time is included in our Norway vs Sweden predictions.