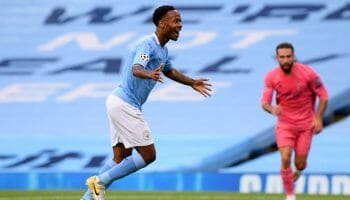 Manchester City look to have been gifted a golden opportunity to reach the Champions League semi-finals when taking on Lyon in Lisbon.

However, it is worth remembering that Les Gones did well against the Blues during last season’s group stage, winning 2-1 away and drawing 2-2 at home.

We still favour Pep Guardiola’s side this time, though, so 9/5 for them to win and both teams to score makes sense for our first Man City vs Lyon prediction.

City’s confidence will have been boosted by knocking out 13-time European champions Real Madrid, prevailing 2-1 in both legs.

A deserved victory in Friday’s home encounter provided us with a trio of winning tips in our preview of that match.

Raheem Sterling and Gabriel Jesus both pounced on mistakes by Raphael Varane, either side of a neat Karim Benzema header.

The Blues suffered quite a few domestic setbacks last season, but Guardiola is keen to avoid any blips at the business end of this competition.

“Now every game is a final – you are in or out,” declared the Spaniard, who lifted this trophy twice as manager of Barcelona.

“We will see a final against Lyon. No more chances, no mistakes.”

Guardiola’s side are invariably fast starters and Man City vs Lyon odds.

Lyon finished as low as seventh in Ligue 1 last season but have already upset the odds by edging out Juventus via the away goals rule.

Having shaded the home leg 1-0 in February, an early Memphis Depay penalty put Les Gones in a commanding position in Turin.

Cristiano Ronaldo did his best to rally Juve with a double strike but Lyon held firm in the face of some strong pressure over the final half an hour.

Defender Leo Dubois said: “We have the necessary qualities for the rest of the competition and you can see how committed we are.”

Keeper Anthony Lopez added: “We were strong and we played for each other. A lot of people don’t think we’ll go further but we have the firm belief that we can do it.”

Getting Depay back from injury is a big boost, while Moussa Dembele is a striker wanted by many of Europe’s elite clubs.

Les Gones just lack a bit of strength in depth at this level, though, and 10/1 for them to lose 3-1 completes our Man City vs Lyon betting tips.