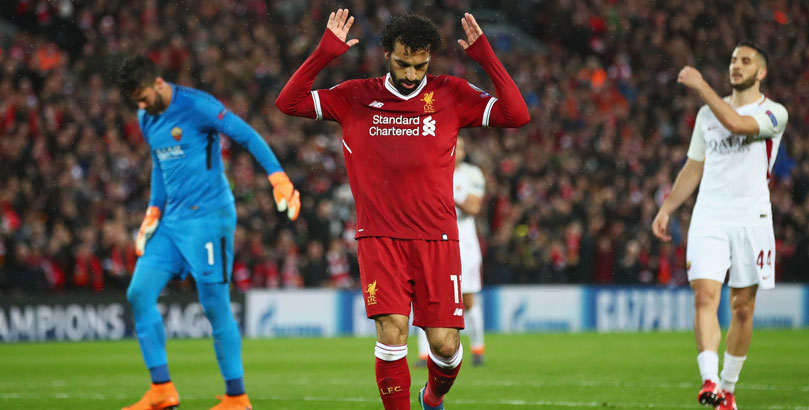 What Trueform says for Roma vs Liverpool

Roma upset the odds when overturning a three-goal deficit against Barcelona in the Champions League but we can’t see lightening striking twice when they take on Liverpool in Italy.

A couple of late goals at Anfield kept the Serie A side in this semi-final tie, but the Reds had earlier looked a class apart when romping into a 5-0 lead.

Such was their early dominance, we fancy Jurgen Klopp’s side at 31/20 to prevail again in the second leg in our Roma vs Liverpool betting predictions.

Roma did manage to expose Liverpool’s defensive frailties when Radja Nainggolan’s ball over the top found Edin Dzeko, who smashed his shot past Loris Karius on 81 minutes.

However, there was more than a hint of good fortune about the penalty decision that helped them make it 5-2 after Nainggolan’s 20-yard effort struck James Milner on the arm.

Giallorossi coach Eusebio di Francesco has not ruled out staging a comeback like the one which saw them beat Barcelona 3-0, having trailed 4-1 from the first leg.

“Hope is still there,” he said. “We don’t need miracles, we just need to believe in what we do against a quality team, and a different team than Barcelona.”

Roma also beat Chelsea 3-0 here in the group stage and are always a threat going forward, but we reckon Liverpool are well-equipped to hit their opponents on the break in the return fixture.

Looking at the Roma vs Liverpool odds, there is plenty of appeal in 12/5 for an away win and both teams to score.

Two brilliant goals for Mohamed Salah, taking his tally to 43 for the season, gave Liverpool a deserved lead at half-time on Merseyside.

Sadio Mane’s close-range strike and a double from Roberto Firmino looked to have wrapped up a place in the final before the late rally from Roma.

“Conceding two goals is not what we want, 100 per cent, but we can deal with that,” commented Klopp.

“We still have to do a job in Rome. That is no problem. We expected that before. Even if we had won 5-0, they would have tried to come back at us.

“But I believe we can go away and score goals, so it’s a very positive result.”

The Reds have sometimes looked shaky on the road in the Premier League this season, but their away form in Europe has been impressive.

Unbeaten on their travels through a qualifying round and the group stage, Liverpool then thrashed Porto 5-0 in Portugal and secured a 2-1 success at Manchester City.

A repeat of that last scoreline is 10/1 and completes our Roma vs Liverpool betting tips.

Liverpool are currently short of midfield options, though, with Adam Lallana (hamstring), Alex Oxlade-Chamberlain (knee) and Emre Can (back) sidelined, while defender Joe Gomez (ankle) is also out.