It’s top of the table against bottom in the Russian Premier Liga this weekend, as Spartak Nalchik entertain in-form CSKA Moscow.

Sitting comfortably at the pinnacle of the league with a two-point cushion over second-placed Zenit St Petersburg and a game in hand, the Army Men of Moscow are unbeaten in their last six matches.

The Eagles’ past record, meanwhile, does not make for such happy reading for fans of the Nalchik-based club. Just one win in 13 games has left them propping up the table and already an early candidate for relegation.

However, football betting fans thinking that this is a foregone conclusion may be interested to learn that overall, recent meetings between the pair swing the balance in Vladimir Eshtrekov’s side’s favour.

The Spartak Stadium outfit have won one and drawn five of their past six games with the current league leaders.

As such, the 7/2 odds on the draw or 6/1 odds on a Nalchik win could be an attractive option for a number of football betting enthusiasts.

Despite this, much of the sensible money is likely to be placed on a CSKA win. bwin offers football betting odds of 2/5 on this outcome and new members using their free £25 bet on this will collect returns of £35.

Perhaps the main reason that Leonid Slutsky’s side sit top of the league is their impressive record in attack and defence so far this term. They boast the best record both offensively and defensively, scoring an average of two goals a game and conceding just 0.75.

The news could prompt a number of punters to try their luck in some of the goalscoring markets offered by bwin.

For example, those choosing to bet on the game producing two goals can get odds of 14/5, while three goals is priced at 31/10. Both four goals and five goals or more offer odds of 9/2.

Interestingly, CSKA have scored most of their goals in the first half of games, suggesting that they will be looking to get on the scoresheet early. Betting on the away team to score more in the first half sees punters offered odds of 37/20.

New customers can register here for their £25 free bet. 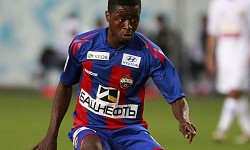 Bet on CSKA Moscow to be too strong for Spartak Nalchik