For the first time in three years, four separate countries are represented in the semi-finals of South America’s premier club competition.

Now down to the do or die stages, either an Argentine, Brazilian, Paraguayan or Uruguayan side will be crowned Copa Libertadores champions within the coming weeks.

The second semi sees Velez on the move, making the short trip across the Rio de la Plata to the Estadio Centenario to play Diego Aguirre’s Penarol.

The two continental heavyweights meet in the Copa Libertadores for the first time on Thursday evening, with the visitors slight 13/10 favourites.

Alternatively, Copa Libertadores betting fans can back the home team to win the first leg at 37/20. A successful £10 bet returns £28.50.

The draw offers odds of 21/10, although with the attacking talent on display from both sides, this outcome would appear unlikely.

Goals have not been a problem in recent weeks for Velez. A total of 12 strikes have been registered in four knock-out games, with the team’s tally for the entire competition standing at 24.

Not only is this an impressive return, it also makes the Argentineans among the most potent sides in the entire championship, averaging 2.40 goals per game.

Indeed, Ricardo Gareca’s team have the firepower to be considered the favourites to go on and lift the trophy. The attacking trio of Maxi Moralez, Uruguayan veteran Santiago Silva and Juan Manuel Martinez are sure to cause problems for the Penarol defence.

The Manyas are expected to line-up with the same XI which battled past Catolica last week, playing with dynamic duo Martinuccio and Olivera up front.

With such an array of attacking creativity and talent on display, punters may be tempted to place bets on the goalscoring markets offered by bwin.com.

Backing the game to be a high-scoring affair could be one option. Betting on exactly four goals to be scored offers odds of 21/4, while three (13/4) or two (13/5) could also be popular picks. 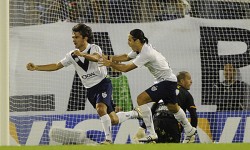 Bet on some Argentine magic as Velez visit Penarol