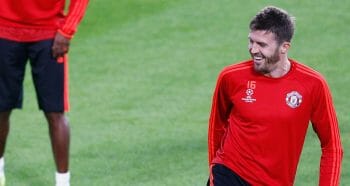 Manchester United’s dalliance regarding the contract extension of fragile lynchpin Michael Carrick suggests the Red Devils are seriously contemplating allowing the veteran to leave for nothing this summer.

His susceptibility to injury is forever frustrating, but when fit and in-form Carrick remains Man Utd’s finest centre-midfielder, as he fights off both father time and pricey contemporaries to retain the mantle.

However, he’ll be 35 at the start of the coming season and it wouldn’t be unreasonable if his current paymasters were cautious about a new contract if their thought process revolved around the perceived likelihood of his stints in the sick bay becoming more frequent.

If Man Utd aren’t keen on a new deal, there’ll be plenty who are, with suitors in China, the Middle East and the USA all mentioned as possible pre-retirement homes for the veteran.

A few clubs closer to base camp have also been suggested, the latest of which being the perfect solution for Carrick if he is to end a ten-season association with the Red Devils.

Everton are thought to have entered the running to sign the England international according to the Sunday Mirror and their record of rejuvenating outcast Old Trafford heroes suggests he’d be mad to turn down any potential approach.

Eight seasons were squeezed out of Phil Neville, who left Man Utd for Everton as a 28-year-old, while Louis Saha, bought by the Toffees at 30, maintained his Reds scoring rate of around one in three at Goodison Park, despite moving to an obviously inferior side.

Tim Howard successfully renovated a reputation from proven gaff-maker to safe pair of hands over a ten-year spell after being tossed the Toffees way aged 28.

Tom Cleverley is currently undertaking a similar operation (though with feet, not hands) after moving to Merseyside from Man Utd last summer.

All of these had more time to play with than Carrick, having signed for Everton in or around their prime, but none were of the same standard of the stalwart midfielder and, besides, through the likes of Gareth Barry and Sylvain Distin in recent seasons, Everton have shown how their style of play enables old timers to flourish.