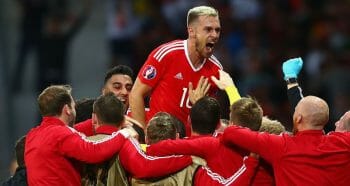 Pragmatism and “respecting the point” are being preached in dressing rooms across Europe at this early, tentative stage in qualifying for the 2018 World Cup.

Inspired by the exploits of their oft-slighted species at Euro 2016, ears pricked and noses twitching, underdogs the continent over sense that they can take advantage of their more illustrious opponents’ timidity.

Four of the choice, outsider-favouring, upset-savouring bets for Monday’s matches lie below – a quartet that deliver odds in excess of 13/1 when combined into an accumulator.

Left to sweat on up to 12 squad members’ eligibility for this fixture until three o’clock today, the Kosovans have received favourable news from FIFA and are likely to be all the more abuzz for their competitive debut as a nation as a result.

Their hosts have won once in their last 11 home games, when beating the Faroe Islands 1-0 in September 2015. Kosovo bested the same opponents 2-0 in their most recent international in June.

The absence of Arsenal’s Aaron Ramsey, Wales’ key conduit between defence and attack is likely to curb their ability to tee off on the Moldovans. Chris Coleman’s men haven’t won a single one of the last four matches they contested without ‘Rambo’.

Moldova are undoubtedly smaller fry than the Netherlands, Portugal, Ukraine or even Northern Ireland, but they’ve lost by single-goal margins to Croatia and Switzerland in their last two matches.

Only eventual finalists France were able to sledgehammer the Blue Wall at Euro 2016, doing so thanks to the dizzying array of attacking talent at Dider Deschamps’ disposal.

Ukraine’s forward line is not of commensurate calibre and their last two home games saw them grind out 1-0 wins against Cyprus and Wales.

Having turned over the Netherlands in the land of Tulips and dykes during qualifying for the Euros just gone, another Iceland rope-a-dope looks on the cards.

Serbia claimed a single win from four home matches during their unsuccessful qualifying campaign for Euro 2016 (albeit with one abandoned at 0-0 after 42 minutes), while their most recent home result was a draw with Russia prior to that tournament.

The Russians subsequently proved that stalemate to have little substance with their travails in France. The Boys in Green have held their own against France and Italy in their last two outings, beating the former and should be strong enough for at least a point here.