Fifa Women’s World Cup betting fans may find it tough to predict anything other than a German victory in their quarter-final meeting with Japan on Saturday night.

Die Nationalelf have only failed to reach the semi-finals of the tournament once – in 1999 – and will be confident of extending that impressive record against the Nadeshiko.

History certainly favours the Germans, as Japan had won just three of their previous Women’s World Cup matches before the start of this year’s competition.

As a result, the odds on Germany to see off their opponents in Wolfsburg are short, with bwin.com offering 11/50 on Silvia Neid’s team to win. That means a £25 bet on Germany could bag a return of £30.50.

Japan’s cause looks bleak given that they have not beaten Germany in their last eight meetings and have failed to find the net in any of their three previous Women’s World Cup defeats to the hosts.

They also have an abject record against European opposition at the tournament, drawing one and losing eight of their nine matches.

However, the Nadeshiko may draw some confidence from their most recent clash with Germany, which took place in Mannheim back in July 2009 and ended in a 0-0 stalemate.

Punters who fancy Norio Sasaki’s side to repeat that result in normal time can get odds of 27/2 at bwin.com.

Veteran creative midfielder Homare Sawa may have different ideas, however. Now in her fifth Women’s World Cup, Sawa is the only player to score a hat-trick at this year’s tournament and will be hoping her pedigree in front of goal can fire Japan through to the semi-finals.

Fans looking for Japan odds will find bwin.com is offering 10/1 on the Far Eastern team to overcome their more illustrious rivals, meaning a successful £25 bet will net winnings of £275. 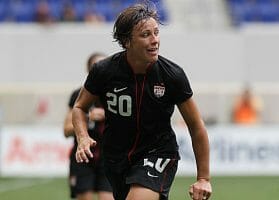