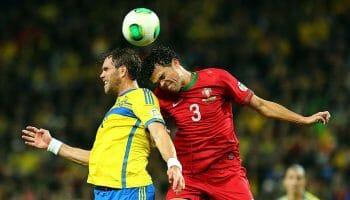 Portugal continued their fine run of form when beating Hungary 3-0 on Saturday and are fancied to maintain the momentum by beating Sweden in Tuesday night’s international friendly.

The Euro 2016 winners have risen up to eighth place in the FIFA rankings, 37 spots above their Scandinavian opponents, and have been scoring goals for fun of late.

The pick of our Portugal vs Sweden betting tips is 7/4 for a home win and over 2.5 goals in the game.

Portugal suffered a brief hangover from picking up their first major trophy when beaten by Switzerland in their opening match on the road to Russia 2018, but since then they have rattled off four straight wins in emphatic fashion.

Both Andorra and the Faroe Islands were hit for six, Latvia were brushed aside 4-1 and then Hungary had no answer to Cristiano Ronaldo and Co over the weekend, with the Real Madrid star bagging another brace in that game.

Ronaldo has now netted nine times in Group B, but he insisted: “I know how many goals I have but that’s not the most important thing. What matters is that we won and we’re in the fight to go to the World Cup. We started out slowly, but everything changed with the first goal. The team played better, more confidently – and the goals came naturally.”

Sweden are no mugs, but the way Portugal are playing, 29/10 for the hosts to score three goals or more again could be fair value.

Sweden also shone on Saturday, beating Belarus 4-0 in Solna to stay three points behind Group A leaders France after claiming three wins and a draw from five qualifiers.

The Scandinavian outfit were disappointing at Euro 2016 when only securing one point and a single goal from three games, but things have certainly picked up since Janne Andersson took over at the helm.

Sweden haven’t failed to hit the back of the net in any of his eight matches in charge, including tough fixtures when losing 2-1 to France and drawing 1-1 with the Netherlands, so it’s worth backing them to grab a consolation strike here.