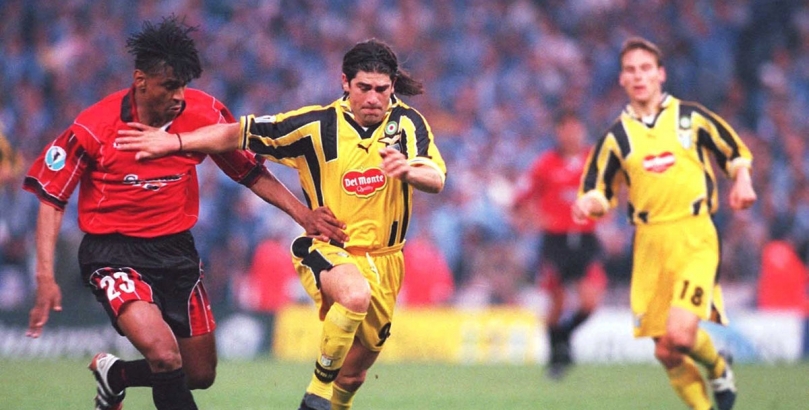 Coventry City die hards will have little trouble recollecting the brief spell in which Vicente Engonga donned sky blue, but the Barcelona-born midfielder is best remembered as a bedrock of the Mallorca side that dared stray as far as the fringes of European glory around the turn of the century. His anchoring heroics in Mallorca’s midfield led to him winning 14 caps for Spain, one of which he won at Euro 2000. Now widely recognised as one of international football’s most feared superpowers, Engonga reckons La Roja will successfully defend their Euros crown for the second summer on the spin in France.

VE on playing for Valencia and Mallorca…

I’m very lucky to have played for two fantastic teams. I had three good years at Valencia but playing for Mallorca was amazing. We built a good team and we were very successful. We were playing in cup finals, most notably in the 1999 UEFA Cup Winners’ Cup against Lazio. Unfortunately, Mallorca are not as good nowadays but people will always remember that team and the great things we did.

I think, unfortunately for Gary, he was unable to understand the club inside out. In Spain there are two or three teams that have a very difficult culture to understand and Valencia is one of them. Valencia is a club that not only focuses on football but also a way of life, a certain culture and that is what I believe he struggled with.

I have spoken to people at the club about Gary and they think he did a good job but the results were disappointing. I don’t think him being an English coach had anything to do with preconceptions, but I think he found it difficult to understand the personalities amongst the squad and not understanding the language and the culture hindered him massively.

I think the fans didn’t see Gary as a leader and I don’t think the players did either, so he was already fighting an uphill battle from the beginning. Across the season it was evident that some of the players in the team were not playing how the coach instructed and it didn’t seem like he had full control of his players.

VE on his move to Coventry City…

Coventry City was a great move for me. I was lucky enough to know Gary McAllister, the manager at the time, who was a very good player and coach. When I arrived the club was going through a difficult time in the Championship but it was a fantastic experience.

I would have preferred to stay longer but unfortunately we decided against carrying on and I retired at the end of the season and returned home to begin my coaching in Mallorca. Overall, I knew incredible people inside the club and great players and I was very happy during my time there.

VE on Hector Bellerin and Pedro…

I think Bellerin is a fantastic player. He has excellent feet and physical attributes but in order to get to the next level, he has to improve tactically – to understand his position better through experience – and when he does, he’ll be Spain’s right-back in the future. He’s been performing very well at Arsenal and I hope he continues to develop.

Pedro is a special player too, but he has to try and adapt to different types of players at Chelsea. At Barcelona he played with players who all had similar qualities, all outstanding technically, whereas at Chelsea there is a broader difference in player abilities so it’s something he has to get used to.

For his first season, it wasn’t a great but he’ll definitely have a better one next year. A player of Pedro’s calibre isn’t suited to the Premier League as it is more physical than La Liga and the referees are more lenient, so he’ll have to adapt but he’s still playing well and he’ll only improve as he acclimatises to the conditions.

Pep is a great friend of mine and in my opinion he’s the best manager in the world. He was a great choice for Man City because his work on and off the pitch will help them drastically. One of the great qualities he has is being able to change a philosophy and style of play very quickly. In one month, I believe you’ll see City playing differently.

I think City can definitely play how Pep wants them to and he’ll be able to direct them as he did with Bayern Munich and Barcelona. He’ll make sure that players train with the utmost intensity and pressure, so the players will soon begin to pick up his style and be able to apply it during games.

Manchester City will be his hardest challenge yet. They will be stronger with him as coach but it’s completely down to the players. Obviously at Barcelona and Bayern Munich the quality of the players were better and this will be different for Pep.

I think where he’ll probably need to adjust is not having a well-known trio of attackers, like he had with Barcelona and Bayern Munich, with Thomas Muller, Robert Lewandowski and Arjen Robben/Franck Ribery.

There will always be an expectation for the Spanish team to go to the final and win the tournament. If we don’t win, it will be a disappointment. The players are under pressure because they are used to winning a lot of titles, both domestically and internationally, playing a great style of football and they’ll have to do so again.

Our group, with Croatia, Czech Republic and Turkey, will be very difficult but I hope that Spain can go far in this tournament. At the moment there is not a lot of confidence amongst the fans because of our World Cup campaign and there is a lot of doubt and uncertainty surrounding the team this summer. It’s crucial to get out of the group. Spain are better suited to knockout football and, if we navigate a tricky group, we will go far.

We have a strong team but how we do will depend on how we defend, so our key players this tournament will be Gerard Pique and Sergio Ramos. If they are both playing 100% in this tournament, then the competition will be a lot easier.

1 Your selection
2 £10 back-up bet!
Min. deposit £10. If your bet loses we’ll give you an extra £10 free bet!
3 Sign up now!
Registration only takes 2 minutes, so register and place your bet now! T&Cs apply
Bet now! Log in
X
Long-awaited return to the birthplace of Arsenal legends to end Gunners’ title drought
Cheer up Spurs fans, history points to improvement next season
Author