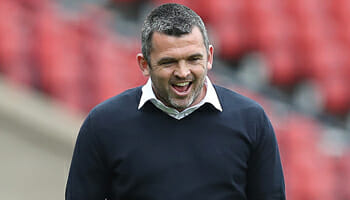 St Johnstone showed great spirit to earn a draw with Galatasaray in Istanbul, even if it was against 10 men at a neutral venue.

However, Gala hinted at times why they have qualified for Champions League group-stage football in six of the last nine seasons.

We feel the Turkish giants will come good in the second leg of this Europa League play-off at McDiarmid Park.

Punters can get 19/20 for an away win and that is tempting enough to be our initial St Johnstone vs Galatasaray prediction.

The first leg took place at the home of Basaksehir due to Galatasaray’s iconic Turk Telekom Arena being developed.

St Johnstone skipper Jason Kerr silenced a lively crowd by netting a 58th-minute penalty after the home goalkeeper had been sent off.

The lead only lasted two minutes before Sacha Boey levelled, but Stevie May had a shot cleared off the line and Saints survived some late pressure.

Callum Davidson commented: “For the boys to perform at that level, second competitive game of the season, it’s all credit to them.

“My first game (as a manager) in European competition, to hold Galatasaray in Istanbul to a 1-1 draw.

“If you said that to me 18 months ago, I’d have said no chance. I’m very, very proud of everyone involved.”

Last season’s domestic cup double highlighted how Saints can never be written off when underdogs.

They will give it a real go again here, so St Johnstone vs Galatasaray odds.

A Look At Galatasaray’s Betting Odds

Galatasaray had previously looked woefully short of match sharpness when beaten 7-2 on aggregate by PSV in a Champions League qualifier.

There was again a pre-season feel to the opening encounter with Saints, as Fatih Terim made three substitutions at half-time.

However, Gala had still threatened to cut loose on several occasions before the break and the Turkish outfit can only improve for the outing.

Fernando Muslera’s dismissal changed the tone of the night and Terim will no doubt be content to have another crack at Saints on level terms.

Radamel Falcao has yet to be risked this term after an injury problem kept him out of Copa America.

Egypt international Mostafa Mohamed looked a shrewd loan signing last season, though, and has a real eye for goal.

The 23-year-old is 11/4 to score in an away win and that completes our St Johnstone vs Galatasaray betting tips.