Neymar’s second campaign at Barcelona continued to be one to savour as the Brazilian’s Bayern-besting brace booked Los Blaugrana a Champions League final ticket.

Fresh from firing his first 50 goals for the Catalan club faster than Lionel Messi had managed the same feat, his decisive salvo meant he had now scored nine times in his last seven games and nine Champions League goals in 11 outings this season.

It took the Selecao poster boy just 87 appearances to reach the landmark – his more decorated colleague had required 119.

Having beaten Messi to the half century, Neymar is right on his coattails in the race to be this season’s top scorer in Europe’s premier club competition too.

Yet, if their respective goals-per-game ratios in the Champions League are anything to go by, he will need to step up again and stay there for several seasons to stand a chance of breaking Messi’s all-time Barcelona scoring record in the competition. 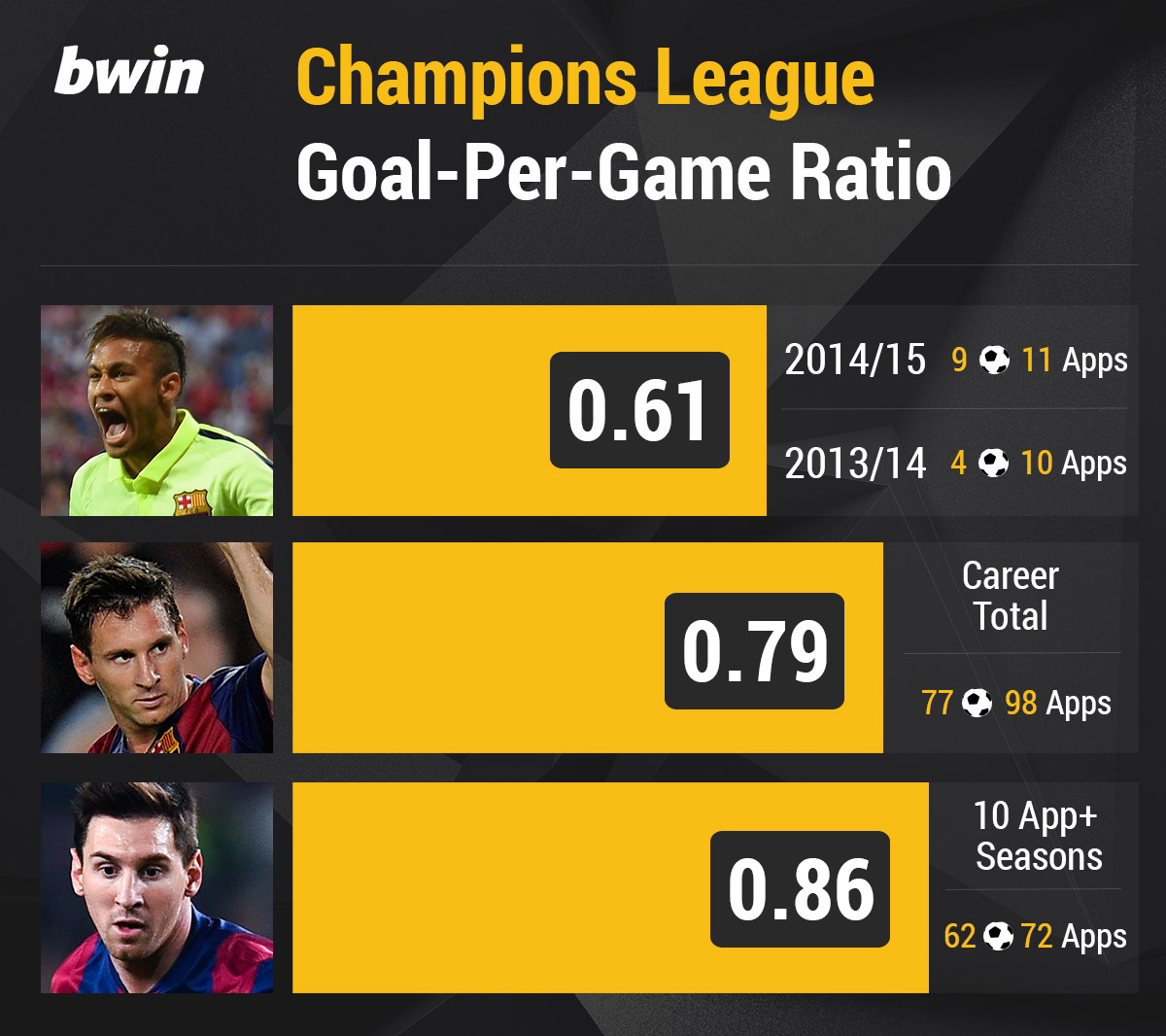 Having netted 14 career Champions League goals to Messi’s 77, Neymar has some way to go to land odds of 50/1 about him ever besting the Argentine’s club-record haul, wherever that already astronomical figure ends up.

The Brazilian has had the advantage of arriving at the Camp Nou already an established force, whereas his colleague only really established himself as a first team regular in his second season, which was itself curtailed by injury.

Despite this, the 23-year-old’s current UCL goals-per-game ratio of 0.62 lags far behind Messi’s career mark of 0.79.

Indeed, in seasons that Messi has played ten times or more in the competition, as Neymar has in both his Barcelona campaigns to date, the Argentine’s quotient rises again, to an even more intimidating 0.86.

Intriguingly, on 2014/15 figures alone the young pretender doesn’t have that far to go to match his La Masia-educated mentor.

His nine goals in 11 Champions League appearances this season equate to a goal-per-game ratio of a mightily-impressive 0.82.

Now all Neymar has to do is continue to perform at such a sensational level for years on end, very seldom succumbing to injury and going deep in the competition as a matter of course and he might, just might, get within sight of his colleague’s record.