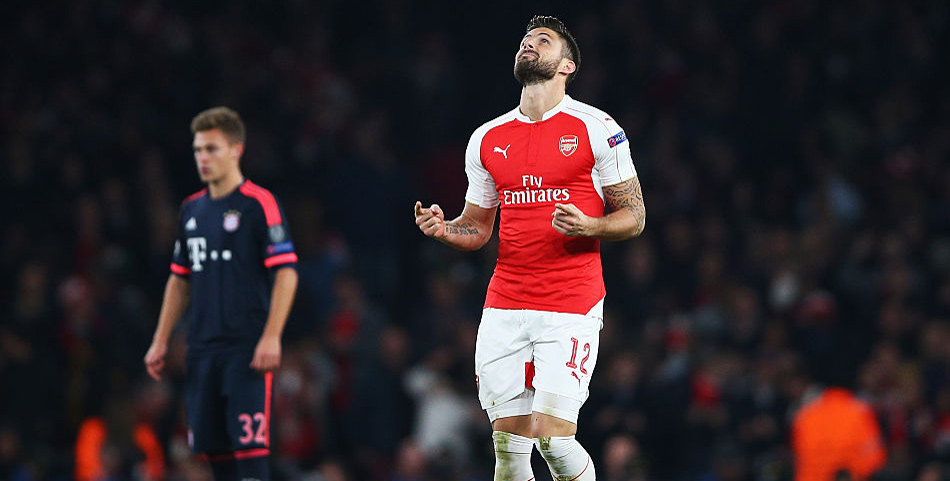 Champions League last-16 opponents Bayern Munich and Arsenal are familiar foes, having met six times in the past four years, with the Germans prevailing on aggregate at this stage of the competition in 2013 and 2014 and topping their group last term.

The Gunners have managed to claim a couple of wins in Munich, but only after first being beaten in London, while Bayern romped to a 5-1 triumph in the most recent encounter at Allianz Arena.

Bayern Munich paid the price for suffering a surprise loss to Rostov in Russia when trailing Atletico Madrid in Group D but they have been more clinical since that defeat, winning 10 of their subsequent 11 matches and drawing the other.

However, Arsenal will take heart from the fact that Carlo Ancelotti’s haven’t exactly been convincing in putting together that run of results, with six victories coming by a single-goal margin and Bayern requiring injury-time goals from Arturo Vidal and Arjen Robben to see off Ingolstadt on Saturday, while there has been talk of internal squabbles in the dressing room.

Bayern are worthy favourites to extend a sequence of 15 straight Champions League home wins, but we’re taking 13/5 they again only oblige with one goal to spare here and allow the Gunners to still dream of turning things around at the Emirates Stadium.

Arsenal have gone out in the first knockout round in each of the last six seasons, often being left to rue not securing top spot in their group, so Arsene Wenger can rightly feel a touch aggrieved to have been handed such a tough draw after edging out PSG in pool A this time around.

The Gunners did well to hold their own in both games against the talented French outfit, though, and will have been relieved to steady the ship in the Premier League by recovering from losses to Watford and Chelsea with a 2-0 defeat of Hull.

Arsenal will find this tough but have managed to hit the target in their last 17 away games, so 39/20 for Bayern to shade it and both teams to score is a solid option.

Olivier Giroud scored in both group games against Bayern last season and when Arsenal won at Allianz Arena in 2013. The French forward was rested at the weekend so could play some part here and we’re tempted by 8/1 he bags the last goal of the game.