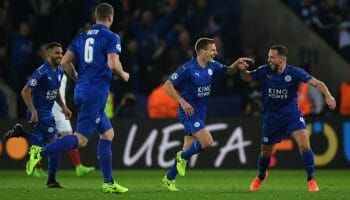 Leicester’s Champions League fairytale will continue with a tough test against Atletico Madrid, beaten finalists in two of the last three seasons, but the Foxes could be value as 4/1 underdogs to go through.

The odds for Leicester to beat Atletico Madrid in the first leg at Estadio Vicente Calderon are 8/1, while the shock English title winners can be backed at 18/5 to return to King Power Stadium on level terms.

Atletico Madrid are in the quarter-finals for the fourth straight season after doing enough in a 4-2 first-leg win at Bayer Leverkusen to allow them to rely on Jan Oblak to steer them safely through a goalless draw in the return fixture.

Diego Simeone admitted it was merely a case of doing what was needed to be done at Estadio Vicente Calderon, as he gave a few younger players the chance to show their worth and gain valuable experience.

Atletico have only been beaten by city rivals Real in the last three European Cup campaigns and the twin threat of Antoine Griezmann and Kevin Gameiro up front will always make them a threat, especially against less-mobile centre-halves such as Wes Morgan and Robert Huth.

Atletico are 9/5 to score at least three goals in the home leg.

Defying the odds is nothing new to Leicester and they were at it again when beating Sevilla 2-0 at King Power Stadium to progress 3-2 on aggregate, with the Spanish outfit clearly ruffled by a white-hot atmosphere for the second leg.

It is a shame that Claudio Ranieri wasn’t still in charge for that famous night after he paid the price for a terrible domestic season, but Craig Shakespeare has inspired an upturn in the club’s Premier League fortunes too.

Atletico’s well-drilled defence will be tough to break down, but they aren’t the youngest of teams and that could open the door for Jamie Vardy to trouble them with his pace on the break.

Both teams to score in the opening encounter is 27/20.