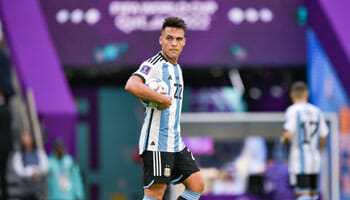 Argentina must bounce back from a stunning defeat in their opening game or face early elimination from a World Cup which they were widely tipped to win.

The 2-1 loss to Saudi Arabia means the South American champions cannot afford to slip up against Mexico, who have one point on the board after drawing with Poland.

That shock loss should focus minds and Argentina to win and over 1.5 goals at evens is our opening Argentina vs Mexico prediction.

Lionel Messi and Co got their World Cup off to a nightmare start as Saudi Arabia recorded the greatest win in their history on Tuesday.

Messi’s early penalty had seemingly put Argentina on course for a routine win but their 36-match unbeaten run was ended by Saleh Al Shehri and Al Dawsari’s brilliant quickfire double early in the second half.

Argentina only had themselves for blame for not being out of sight by half-time, having had three goals ruled out for offside in the first half.

It was the first time Argentina had lost their opening game at a World Cup since being beaten by Cameroon in 1990 – the fact they reached the final that year shows all is not lost.

Messi said: “It is a very hard blow for everyone. We did not expect to start this way. Things happen for a reason.

“We have to prepare for what is coming, we have to win, and it depends on us. There are no excuses.

“We are going to be more united than ever. This group is strong and we have shown it. It is a situation we haven’t gone through in a long time. Now we have to show this is a real group.”

Lautaro Martinez netted two of Argentina’s disallowed goals and can cause problems for the Mexico defence.

Messi is the obvious favourite to score first at 4/1.

Mexico seemed happy to settle for a goalless draw against Poland given Argentina’s result earlier in the day but that lack of ambition may come back to haunt them if they lose this one.

El Tri would undoubtedly accept another draw especially given they struggled to create clear-cut chances against Poland despite dominating possession.

Guillermo Ochoa’s penalty save from Robert Lewandowski was the defining moment of the game and even the second-half introduction of Raul Jimenez could not provide Mexico with a spark up front.

They have only managed one draw in their last nine meetings with Argentina and failed to find the net in the last three.

Two of those ended in a 2-0 defeat so the same outcome again at 25/4 completes our Argentina vs Mexico betting tips.