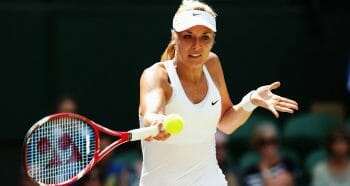 If you’re a fan of Wimbledon and enjoy having a bet on the tennis, you’re smack-bang in the right place at bwin.com.

To accompany all the action from the world’s most iconic tennis Grand Slam, the bookies in black and gold are rewarding their customers with huge free-bet prizes, simply by having a flutter on Wimbledon.

For all the nitty gritty on this cracking offer simply click here and for informed betting insight on some wagers which can hopefully get punters ascending the competition leaderboard, read on.

Having combed through the forthcoming schedule of play in SW19, these three bets stood out:

Both these men have previous for headline making at Wimbledon. In successive years (2012/13) Gulbis dumped out top-ten staples Jo-Wilfried Tsonga and Tomas Berdych, while Rosol famously ended two-time champion Rafael Nadal’s involvement in 2012.

Rosol, who now ranks 42 places higher than his Latvian opponent, won the pair’s last meeting and crucially has played twice as many matches on this surface heading into this clash.

The best form guide being victory over world number 14 Kevin Anderson, who went all the way to the Queen’s Club final after that Boodles defeat to Rosol.

Lisicki is rightfully well respected at the year’s third Slam having reached the final two years ago, accounting for Serena Williams along the way.

A quarter-finalist in 2014, the German will be looking to go deep again, but could be in for a tricky start to her tilt up against Gajdosova.

The Australian won 12 of 15 matches on grass last season claiming the Nottingham ITF event title, while she took world number five Caroline Wozniacki to a first-set tie break, before bowing out to the Dane in the second round of Eastbourne.

This has been a spectacular breakthrough year for Swiss number one Bacsinsky who has claimed two WTA titles, stringing together 15 consecutive wins, before achieving a last-four spot at the French Open.

In contrast, Goerges’ career has steadily been declining since reaching her last final back in 2012, as the German has slipped to world number 56, from Bacsinsky’s current position of 15th.

It’s fair to say Goerges is not a fan of grass either, as she’s come a cropper in five straight matches on the surface stretching back to 2012.