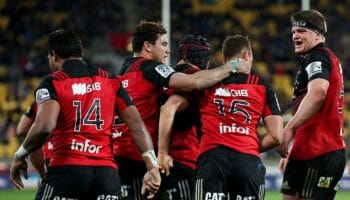 South Africa’s Lions will have home advantage in Johannesburg for this year’s Super Rugby final but we’re backing the Crusaders to deny their hosts a first title and lift the trophy for the eighth time.

The New Zealand franchise dominated this competition between 1998 and 2008, claiming outright glory on seven occasions and appearing in two other deciders.

It has been a long time between drinks for the Christchurch outfit, but they appeal at 4/5 to become the fifth Kiwi champions in five years in our Super Rugby final predictions.

A Look At The Lions’ Betting Odds

The Lions reached their maiden final 12 months ago when going down 20-3 to the Hurricanes in a cold, wet and windy Wellington.

However, they gained some revenge for that defeat with a dominant second-half display against the same opponents in this season’s semis at Ellis Park, rallying from 22-3 behind to prevail 44-29.

A yellow card for Canes fly-half Beauden Barrett after the break helped the Lions’ cause, but this was still an impressive performance, full of powerful running by both backs and forwards.

The early stage-fright shown has to be a concern, though, and a similarly nervous start would make the Crusaders good value at 4/5 to bag the opening try.

A Look At The Crusaders’ Betting Odds

The Crusaders will have to cope with warmer conditions at a sold-out Ellis Park but their defensive work has been simply superb during the knockout stages of this competition.

After securing a record 14 wins in the regular season, they beat the Highlanders 17-0 and then soaked up plenty of pressure when overcoming the Chiefs 27-13.

A forward pack containing a wealth of All Blacks experience is the key to controlling the decider.

Loose forward Kieran Read can boast a century of caps, prop Owen Franks and lock Sam Whitelock are not far behind on 94 and 88 respectively, while front-rower Wyatt Crocket has made 62 Test appearances.

The backs are also rock-solid, with Israel Dagg capped 65 times and possessing the class and confidence to hunt out the ball at key moments.

Seta Tamanivalu’s two tries in the semis highlighted how he can cause havoc with barnstorming runs and this just seems to be a team without any obvious weaknesses.

Punters can get 13/10 for the Kiwis to be leading at half-time and full-time and that completes our Lions vs Crusaders betting tips.