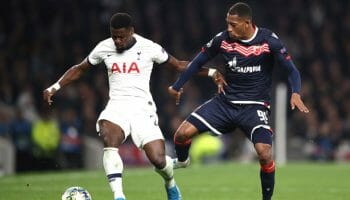 Tottenham were totally dominant when thrashing Red Star 5-0 in London but their opponents invariably look a different team on home turf in the Champions League.

Vladan Milojevic’s side beat Liverpool and drew with Napoli in Belgrade last season, while they have already seen off Olympiakos via a 3-1 victory this term.

We think 29/20 for the hosts to avoid defeat is tempting enough to be our initial Red Star vs Tottenham prediction.

It was hard for Red Star to take anything positive out of their Matchday 3 drubbing by Spurs, but it is worth reiterating how much stronger they have been in the Serbian capital.

They recovered from a 4-0 mauling at Anfield to beat Liverpool 2-0 exactly 12 months ago, thanks to a Milan Pavkov double.

The 25-year-old forward has also netted versus HJK Helsinki and FC Copenhagen here this season, helping Red Star to be unbeaten in five European outings at Stadion Rajko Mitic.

Last month’s 3-1 triumph over Olympiakos was the pick of those performances and head coach Milojevic can’t wait to get back to familiar surroundings.

“We have a lot of self-confidence in front of our fans,” he insisted. “We expect a full stadium at home, which raises our belief, which in this game we were lacking.

“There are still plenty of points we can score. I told my players to look forwards. We need to forget this pain and look forwards.”

Going ahead would be another huge boost to morale and Red Star vs Tottenham odds.

Tottenham were in need of a fillip themselves at the time of the first fixture between these teams, having previously drawn 2-2 away to Olympiakos before being hammered 7-2 by Bayern Munich in London.

Doubles from Son Heung-min and Harry Kane, plus a strike from Erik Lamela helped alleviate any pressure that had built up on Mauricio Pochettino.

“It was an important result,” said the Argentinian. “One, for our confidence, and another because to add three points in the table was very, very, very important.

“I feel good because we start to see that it’s only time we need to recover our best feelings.”

Spurs have had a topsy-turvy campaign, though, and don’t look the type of team to be relied upon when the going gets tough right now, especially on the road, having gone eight away games without a win.

Pochettino still has plenty of question marks hanging over his squad and we’re keen to take them on when facing a hostile atmosphere from the stands.

Punters can get 31/2 for a 2-1 home victory and that is a value addition to our Red Star vs Tottenham betting tips.

Son is in Tottenham’s squad, despite being visibly upset following his involvement in the challenge that saw Everton midfielder Andre Gomes suffer a broken and dislocated ankle on Sunday.

Kane was also part of the group that travelled, fit again after he missed the Goodison Park clash with a virus.

Erik Lamela was not present, as he battles a thigh injury, while Hugo Lloris is also a long-term absentee.