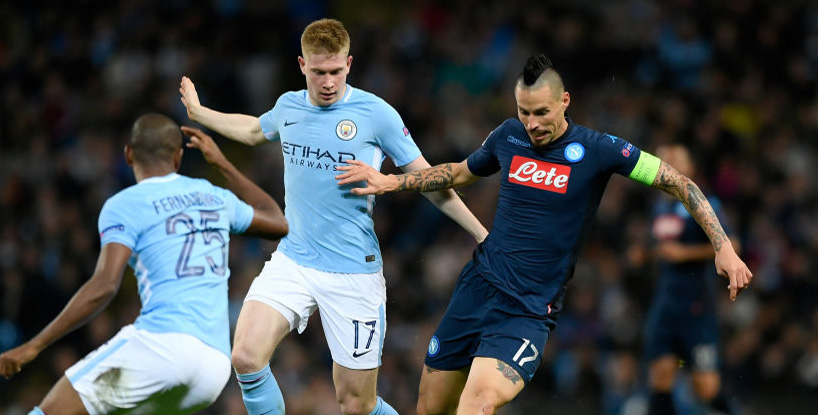 Manchester City pulled off a thrilling 2-1 win against Serie A high-flyers Napoli at the Etihad Stadium and can maintain their perfect record in the Champions League group stage by obliging again in the return fixture in Italy.

With Napoli three points behind Shakhtar Donetsk and six off City, this is a match the hosts can ill-afford to lose but they face an uphill battle in our book.

Both teams have scored in all three of the Italians’ group games and as we expect gaps to appear in the search for goals.

We like the look of 5/2 for the visitors to win and both teams to score as the first of our Napoli vs Man City betting predictions.

Pep Guardiola described Napoli as one of “the most exciting teams in Europe” following his side’s victory at the Etihad but with flair comes risk.

The Italians have either conceded or scored inside the first quarter of an hour in all three of their group games while City have only failed to score early on against Shakhtar.

These sides only know how to play one way so jump on the 17/10 for at least one goal to be scored between 0-15 minutes from the Napoli vs Man City odds.

City are close to qualifying for the knockout stage for the fifth year in a row but they will have their work cut out against a talented side.

Napoli coach Maurizio Sarri reckons City could win the Champions League, saying they are an “extraordinary squad” and bwin make them 6/1 third favourites to lift the trophy behind Real Madrid and PSG.

City are up against a side whose three group games have fallen neatly into the 3-4 total goals band and at 27/20 we think that’s the way to go to complete our Napoli vs Man City betting tips.