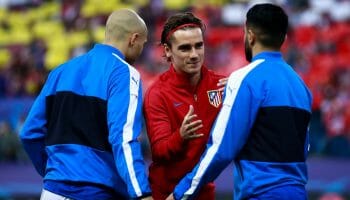 Leicester may be 5/1 underdogs to reach the semi-finals but their dream of a fairytale Champions League triumph is far from over after the first leg against Atletico Madrid.

The Foxes were understandably put under a ton of pressure at Vicente Calderon, but in the end only succumbed to a dubious Antoine Griezmann penalty after he appeared to be fouled just outside the box.

It should again be tight at King Power Stadium, but we’re taking a punt on the hosts to win on the night at 14/5 in the Leicester vs Atletico Madrid odds.

Kasper Schmeichel was called on to make several saves when Leicester visited Atletico Madrid, but the Foxes did reduce their highly-rated opponents to shooting from long range for much of that match.

City offered little going forward themselves, but Craig Shakespeare insisted: “I’ve seen enough throughout the squad, through working with them – we know what we’re about at the King Power, we know what we’ve got to do.”

Porto, Copenhagen and Brugge were all beaten in the east Midlands during the group stage of this competition and Seville were sent crashing out when going down 2-0 there last month.

A white-hot atmosphere will await Atletico and we’re taking 8/5 for Leicester to fire up the home fans even more by scoring first.

Atletico Madrid started strongly in the first leg and could have gone ahead early on when Koke rattled the woodwork with a fine strike from outside the area, but they were frustrated by the Foxes for long periods.

Diego Simeone was clearly disappointed at the final whistle and declared: “We lacked the clinical finish. We had most of the possession but I think Leicester were gambling on getting us on the counter attack. I think they are betting everything on the second leg.”

Atletico have tremendous Champions League experience and are favourites to reach the semi-finals for the third time in four years, but that angst shown by Simeone showed they may now be feeling the weight of expectation.

We reckon this tie could go all the way and are taking 17/2 for Leicester to win 1-0 in normal time.