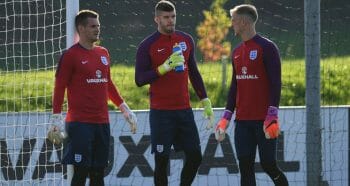 Victor Anichebe, who scored his first goal for Sunderland in the 2-1 win at Bournemouth last time out, believes teammate Jordan Pickford ‘will one day become England’s number one’, but the 22-year-old has quite a bit of traffic in his way.

Gone are the days when David James was making his World Cup debut for the Three Lions at the age of 40, with 30-year-old Burnley custodian Tom Heaton the eldest of the four goalkeepers England have used in 2016.

Heaton is currently vying with Southampton’s Fraser Forster – who pulled out of Gareth Southgate’s latest squad due to injury – to be Joe Hart’s first reserve, and possibly the on-loan Torino man’s replacement should his stock fall any further.

After being shipped out of Manchester City following Pep Guardiola’s summer arrival, apparently due to perceived poor distribution, Hart was tipped to lose his country’s number one spot to Forster ahead of Sam Allardyce’s first and only match in charge of England against Slovakia in September.

The 29-year-old was spared the prospect of another rejection after the Southampton ace pulled out of the fixture through injury, with Forster developing the unhappy knack of skipping internationals due to fitness issues.

However, the man Hart (and eventually Pickford) may fear most is Stoke City’s Jack Butland, whose late-season absence coincided with the Potters failing to win all-but one of their last seven Premier League fixtures of the 2015/16 campaign, having taken 13 points from the previous 18 available.

Mark Hughes’ men carried that form into the new term, going winless during the first seven top-flight rounds of this season before finally picking up three victories in a row against fellow strugglers Sunderland, Hull and Swansea.

Butland, who is expected to return from almost eight months out by the end of November, has long been thought a future England number one and already has 142 senior club appearances to his name – 31 coming in the Premier League last term – despite only turning 23 in March.

Pickford is just over a year younger and has only seven top-flight appearances under his belt, plus nine England U21 caps to Butland’s 28, so the Black Cats local boy clearly has plenty of catching up to do.

England are 2/1 to win at home to Spain.