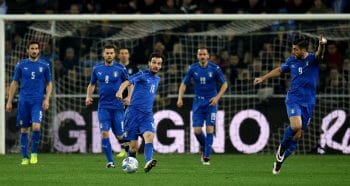 No tie in the round of 16 illustrates the old rumination ‘what difference a day makes’ more than Italy v Spain.

Before losing their final group match to the Republic of Ireland the Azzurri had been trimmed from 18/1 to 10/1 to win the tournament on the back of commanding victories over Belgium and Sweden.

They were promptly shunted back out to 16/1 in the aftermath of that reverse. Never mind the fact that Antonio Conte had taken the opportunity to rest numerous players with his team already assured of winning their mini league and still came minutes from shutting out an Ireland side fighting for survival.

Confidence in the Spanish, at a long-time high after a 3-0 demolition of Turkey in their second outing, is also more qualified a game later after their shock defeat at the hands of Croatia.

Arrogance was their Achilles heel against Ante Cacic’s side according to La Roja defender Juanfran, who has assured reporters, “there was a small excess of confidence [against the Croats], but that is something that we have corrected.”

However, the Atletico Madrid man then gave cause to doubt the sincerity of his repentance, saying, “most of our games we have been the better side, apart from the last 20 minutes or so against Croatia.”

More neutral onlookers may have had the former-Yugoslavia side holding their own for the majority of the second half.

Spain remain wide-margin favourites in the match betting for the sides’ last-16 encounter, despite fielding a full-strength XI for their slip up, unlike their last-16 opponents.

Let’s get something straight, it hasn’t been unusual, as brother Tom once alluded to, for Italy to cause Spain problems in their recent encounters, despite the latter dominating international football for six years between 2008 and 2012.

Yes, La Roja put four past them for no reply in the Euro 2012 final, but that was one of just three times they’ve bested the Azzurri in eight meetings since March 2008.

Most recent of those tussles was a 1-1 draw played out in March. In summing up the takeaways from that encounter UEFA.com’s Ben Gladwell observed:

“The game was played at a slow pace for two such exciting footballing nations, but coming at such an important juncture of the club season that is understandable. Spain in particular seemed to be taking things casually…

“Any potential rematch in France this summer could be completely different.”

There is no reason to expect them to be able to turn the razzle dazzle back on to an unstoppable extent against an Italy side who have already proved themselves even more concerned with organisation and collective action that usual, due to their midfield-injury epidemic.

Recommended bet: Italy to advance to the next round @ 6/4

One or other side has failed to net in each of the Azzurri’s last five internationals, each of which has limboed the 2.5-goal bar.

Spain, meanwhile, were breached for the first time in 11 competitive games in losing last time out, this one’s bound to be nip-tuck.

Stifling the Spaniards will likely be a central concern for Conte’s men, meaning that no goalscorer makes some appeal at 17/4.

However, Eder, a hive of industry in both games he has played in so far (netting the winner in the latter), looks precisely the type of player to profit from a quick turnover following a long spell of opposition possession.

Just two of the sides’ eight meetings dating back to 2008 (inclusive) have seen a single goal before the interval and one of those was tied 1-1 at the midway point.