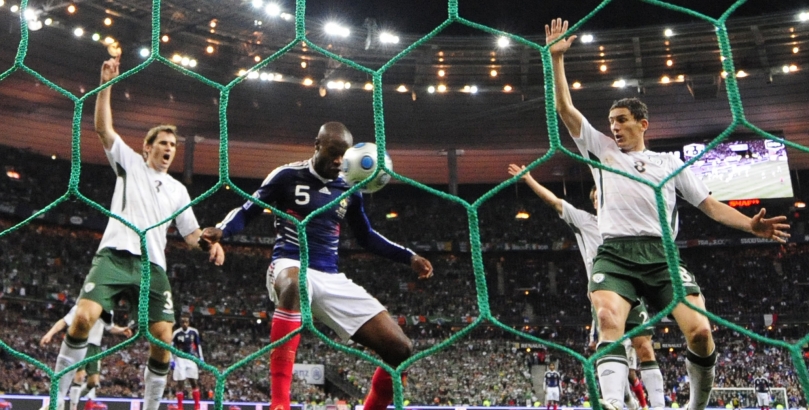 After nigh-on seven long years submerged in liquid nitrogen at zero degrees Kelvin, revenge is finally the dish of the day for the Republic of Ireland.

The last time they met France in Les Bleus’ backyard, the Boys in Green were cheated out of qualification for the 2010 World Cup by a goal created with thanks to a regrettably obvious Thierry Henry handball.

Having had no choice but to choke down the injustice committed on that night in Paris, the prospect of exiling Didier Deschamps’ men to the bleachers early on in their own home-soil Euros must be a satisfying one.

They were not to be denied against an admittedly-weakened Italy in their final group game, but a full-strength, maximum-motivation France will be another proposition altogether.

Les Bleus’ squad is undeniably superior in terms of talent and rides into Lyon on a streak of one loss (and ten wins) in their last 12 games.

However, only one host nation has even reached the final of the tournament since Les Bleus last won it in 1984 and they have yet to begin playing convincingly enough to be confident of avoiding a struggle against the Irish.

Are they vulnerable against a nation who would like nothing better than to ruin their party? You bet.

The above graphic helpfully illustrates the night and day differences in recent results between the adversaries, but the realities of their respective form at Euro 2016 are less distinct.

France fluffed an embarrassment of chances during the group stage and wouldn’t have qualified for the round of 16 were football matches 88 minutes in length instead of 90.

Despite going through unbeaten and having conceded just once, they exhibited a clear fragility at set pieces throughout.

Meanwhile, Ireland should have beaten Sweden and were denied a clear penalty at 0-0 against Belgium before losing their heads in a sobering 3-0 defeat.

The Republic responded to that beating by besting the Italians and having taken four points off world champions Germany in qualifying there can be little doubt they are capable of giving even elite nations a tough night when they are short of fluency.

By now this tournament’s overwhelming tendency towards low-scoring affairs – an average of 1.92 goals per game in the group stage and two strikes or less in 25 of 36 fixtures – has made backing under 2.5 hits a rich man’s game.

Avoiding an attacking slug-fest they can only lose will doubtless be the Irish game plan and a tense evening is sure to be in prospect.

France’s inability to assert themselves in the scoring stakes until the dying minutes thus far further lends itself to the feeling that bettors will be lucky to witness a net bulge once inside normal time.

But for an assist and a goal from Dimitri Payet, Les Bleus would have lost their opener against Romania – the West Ham man has been their leading light at the Euros with few serious rivals for the role.

The Reunion-born maestro has struck in four of his last five matches for his country with the three most recent strikes each the final scoring act in their respective contests and coming in the 89th minute or later.

Only the crossbar stopped him from extending that remarkable streak in spectacular fashion against Switzerland last time out.

It’s not so surprising France are amenable to an early substitution given the deep quality within their ranks.

Deschamps had made the first change in all three matches so far, with fresh personnel introduced by the 68th minute on each occasion.

Recommended bet: France to make first substitution of the second half 91/100