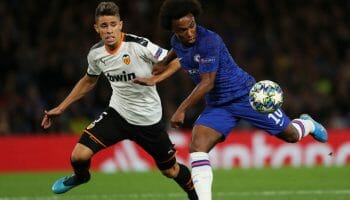 Chelsea’s home clash with Valencia in Champions League Group H was a tight and tense encounter and more of the same is expected at the Mestalla.

These teams are locked together on seven points alongside Ajax after four rounds of fixtures and everything is still to play for in this pool.

Los Che won 1-0 at Stamford Bridge after Ross Barkley missed a late penalty, but the Blues are fancied to secure a share of the spoils in Spain.

That should suit Frank Lampard, as his side finish off by hosting basement dwellers Lille, while Valencia must visit Amsterdam.

Punters can get 5/2 for a draw here and that is our initial Valencia vs Chelsea prediction.

Rodrigo took advantage of some poor marking at a free-kick to grab a 74th-minute winner when these teams met in London, ruining Lampard’s European debut as Chelsea manager.

Los Che were then hard done by when going down 3-0 at home to Ajax in a contest which also saw them create plenty of chances.

There was late heartbreak when drawing 1-1 away to Lille, with Jonathan Ikone cancelling out Denis Cheryshev’s opener in injury time after Mouctar Diakhaby had been sent off late on.

However, it was Valencia’s turn to finish strongly when coming from behind at the break to beat the French outfit 4-1 at this venue, with three of their goals coming in the last 10 minutes.

Progressive young coach Albert Celades has been positive since coming in after spending time with Spain’s youth teams and briefly assisting Julen Lopetegui with La Roja and Real Madrid.

That makes Valencia vs Chelsea odds.

Substitute Barkley caused a stir when brushing aside Jorginho and Willian to take the spot-kick against Valencia on Matchday 1, only to see his shot glance off the top of the bar.

There was little between the teams in open play on that occasion, though, and the Blues have since shown enough improvement to again be considered favourites for the return fixture.

They recovered to win 2-1 at Lille and then secured a memorable 1-0 triumph at Ajax, with Michy Batshuayi striking five minutes from time.

Lampard’s men showed remarkable spirit to rally from 4-1 down to draw with the Dutch giants in London last time out in this competition, although they were aided by Daley Blind and Joel Veltman being dismissed in quick succession at 4-2.

Glossing over the “madness” of that match, the head coach beamed: “We are here for entertainment, I suppose, and anyone who watched that has to say ‘what a game of football’.

“I’m not happy overall, this is the Champions League and we made too many mistakes, but the biggest pleasure is the spirit the whole stadium showed.”

Club officials will have fond memories of past visits to the Mestalla, with the Blues having claimed two wins and a draw here between 2007 and 2011.

We’re going for another decent outcome this time and 13/2 for a 1-1 stalemate completes our Valencia vs Chelsea betting tips.