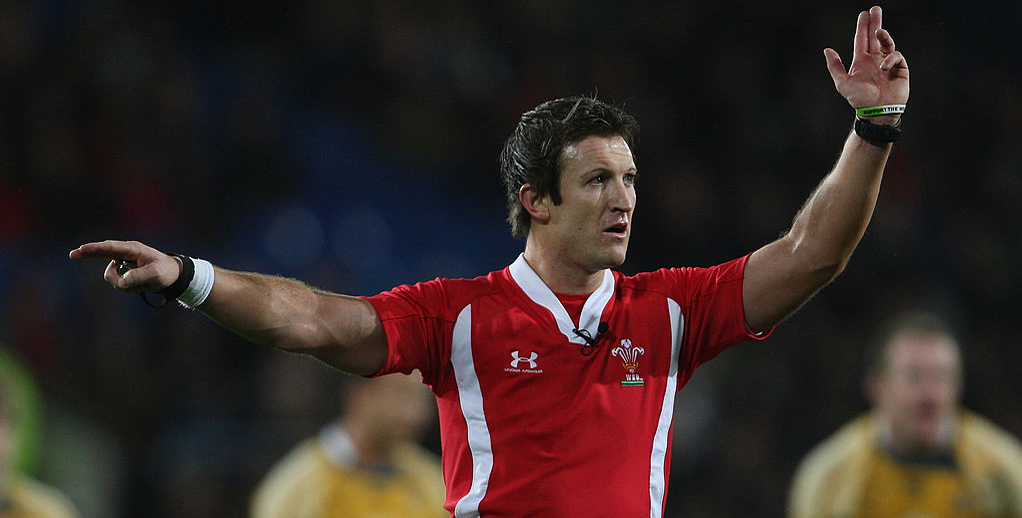 Former Wales Rugby Union referee James Jones knows what it is like to be the man in the middle on the big occasions. Ahead of the opening weekend of the 2017 Six Nations, he discusses the issues facing the match officials including high tackles, head injuries and player discipline.

On the different style of playing across the nations…

The gap is getting closer but traditionally there are different styles of play. In general there are two different styles of play. You have a forwards-orientated game with big, strong, powerful players that will keep the ball close to them, they won’t pass it and play flair or attractive rugby and they allow the big physical men to try and dominate the opposition. Traditionally we see teams like new Zealand doing this, South Africa have done it over the years, Argentina too have been big and strong, as have the Islands – Fiji, Tonga.

On the impact of Eddie Jones on the England team…

He’s had a huge impact. The foundations were there with the players before, but certainly since Eddie Jones came in he’s brought his philosophy. And he showed that with Japan too in the World Cup. They played some good rugby and his influence has been massive.

There has been the danger that this extra protection brings too many soft cards, we saw it in some games where it was first introduced just after Christmas. There were a number of cards given that were very, very soft.

Now coming into the Six Nations it’s going to settle right down because World Rugby have again said to the referees, it’s not about looking to give cards, it’s simply to protect players so there has to be common sense applied.

If a player does make contact and it’s dangerous – that’s what they’re looking to get rid of. If it’s accidental or a player does have a collision but there’s no intent or malice and no injury concerns there, referees have to be sensible. You may see penalties but I don’t think we’re going to see silly yellow cards like we’ve seen in the build up to the Six Nations.

On whether it’s a disadvantage for taller players…

It does become awkward and I don’t think the directive has changed that. If you have a tall player trying to get hold of a very small, quick player, it is difficult. Players are very skilled even at taking contact now so I don’t think that’d be too much of an issue.

On the decision to keep George North on the pitch after being knocked out….

In George’s incident he was apparently knocked out or seen to be knocked out on the footage that appeared and nobody saw that from the medical staff and that plays a big part in whether that person is allowed to continue. I think as far as match officials are concerned, safety is paramount.

So even though referees do have a responsibility, your ability to say to a player ‘You’re not continuing with the game’, and that does happen at lower levels, when you have a qualified medical practitioner saying ‘this person is fit to come back on the field’, at the top level of the game – very, very rarely will a referee overrule a doctor because they have a duty of care as well so usually you feel that they’ve done their job and that’s sufficient.

All referees now involved in the Six Nations are the best in the world so elite referees are picked for the tournament and I think they’re all very experienced. They’re fully aware of the rivalries between nations and there are now greater rivalries involved between teams in Pro 12. Because these players will play against each other regularly, the teams in France play their own competition, as do England, so there are rivalries there and players will know each other quite intimately.

I don’t think referees go in with a different approach and I think with technology around now – television match officials, citing officers – the days of the old-fashioned kick offs or punch-ups, as they were, have long gone. There are elements of foul play, where some players will get over excited, but I think those days are long gone.

Referees now will know the rivalries are there, they’ll do their homework and preparation, but I don’t think referees will approach the games differently.

You can get issues sometimes with language barriers, For example, if Italy and France are involved, a lot of these players do speak good English but their first language is their native tongue so referees will be more aware of that. Some referees are becoming bilingual now, certainly when it comes to French speaking, but they are aware that communicating with some of these players, they have to be maybe softly spoken in order to calm things.

It’s not necessarily a change in approach but they will be aware of different ways of communicating with these teams compared to someone where English is their first language.

I think it’s naive to say referees won’t be aware of it because certain things hit the press and it’ll be everywhere. I don’t think referees would go in with any preconceived ideas. They would certainly have that in their armoury and be aware of that in the event that should Conor Murray get excitable or anything arises from that they’d have to deal with it. I don’t think referees would approach those players differently or go looking for that problem.

A big example of this is Richie McCaw. Everyone said for years that Richie McCaw was a cheat and he was never even yellow carded in Test match rugby so referees never go in with any preconceived ideas. They will go in and look at teams and styles of play and players that could be problematic but they’ll just deal with what’s presented to them and just have something in their pocket should anything occur, as opposed to looking for a problem.

In a way it’s easier. For example, Dylan Hartley is fully aware that had that happened in the Six Nations then it may have cost him a Lions tour. So I think these players now, if anything, are better behaved because they want to set examples. They don’t want to pick up suspensions for silly things that could cost them the pinnacle of their career.

I remember Alan Quinlan was selected for the Lions and he did something silly and couldn’t go, so players are now fully aware that discipline in the Six Nations is vital and also coaches will bear that in mind. So Warren Gatland will look at these players and if they are giving away cheap penalties during the Six Nations, it lessens their chances of being picked as potentially they could be a liability. And in Test match rugby now, giving away penalties can cost you a game because these goal-kickers can now kick from fantastic distances.

I firmly believe the blame lies with the FA and it’s a bold statement but they haven’t supported their referees for years. We’ve seen players running up to referees, screaming in their faces, waving their hands and gesturing and it hasn’t been dealt with.

In rugby union, there has always been a zero tolerance. I think with football, even though it’s got better this season because the FA have come out and said we’re going zero on this, it’s going to take a long time to change that culture. And that culture has to start at the top and filter down, and I think as soon as these players are given straight red cards for verbal abuse and long suspensions, it’ll soon stop.

1 Your selection
2 Start Playing
Register, deposit £10 or more and place a Sport bet (3+ selections) up to £20, each with odds of 1/2 (1.5) or greater.
3 Get your FreeBet
If it’s not a winning bet, you’ll get up to £20 back as a FreeBet. T&Cs apply
Bet now! Log in
X
Burkina Faso and Egypt hard to split in AFCON semi
Super Bowl LI: The quarterbacks compared
Author