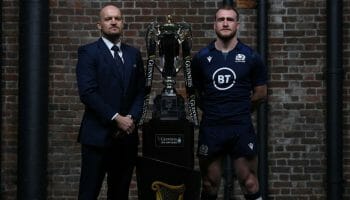 Ireland comfortably accounted for Scotland at the World Cup and have won their last couple of Six Nations encounters, but now must adapt to a new regime.

Andy Farrell may have been promoted from within, but there is still every chance that the men in green may take a little time to adjust to any subtle alterations.

They could still be just too strong on home turf here, but 91/100 for the visitors with 14 points start is our opening Ireland vs Scotland prediction.

Ireland finished third in this tournament last term, losing to England first up and Grand Slam champions Wales in round five.

In between, there were solid victories over Scotland, Italy and France, although only by nine, 10 and 12 points respectively.

At the World Cup, Scotland were thrashed 27-3, but a 19-12 defeat by hosts Japan cost Ireland top spot in Pool A and led to a 46-14 drubbing by New Zealand in the quarter-finals.

Inspirational hooker and captain Rory Best has since hung up his boots, while veteran full-back Rob Kearney has been moved on.

Half-backs Conor Murray and new skipper Jonny Sexton will provide stability, but there is a feeling that this is a team in transition.

“The young kids are ready to go and we’ve got a hell of a team going into the Scotland game,” insisted Farrell.

However, with Farrell very much a rookie himself when it comes to taking full control, the 2018 title winners have plenty of questions to answer in Dublin.

Looking at the 17/20 for the visitors with 6.5 points start in the first half is tempting.

Scotland only managed to beat Italy in a disappointing 2019 campaign, but they were competitive when going down 18-11 against Wales and closed with a thrilling 38-38 draw versus England at Twickenham.

Losses to Ireland and Japan prompted an early exit from the World Cup, although they did score 95 points without reply in routing Samoa and Russia.

Gregor Townsend goes into this tournament buoyed by a good showing from Glasgow in the Champions Cup, while Edinburgh are top of their Pro14 Conference.

“I would say the media and public are making more of a meal of the story than us,” Jones said.

“If you ask the players, none of us are really that bothered about it. The focus is on the guys who are in the squad.”

A fast start in Dublin would help to settle any nerves and 5/4 for the visitors to score the first points is added to our Ireland vs Scotland betting tips.