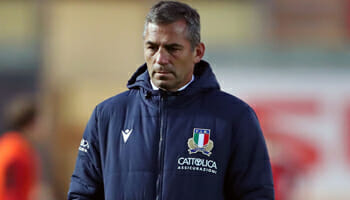 Italy have tended to save their best Six Nations efforts for when facing France in recent seasons and may be worth backing with a big start in Rome.

The Azzurri were on top for long periods before going down 25-14 here two years ago and played their part in an entertaining 35-22 defeat in Paris last term.

We’re snapping up 4/5 for the hosts receiving 21.5 points on the handicap list for our first Italy vs France prediction.

Admittedly, Italy haven’t won a Six Nations match for the past four years and are as short as 1/20 to end up with the wooden spoon again this term.

The Azzurri haven’t even picked up a bonus point during the last two renewals and the pressure is now on South African coach Franco Smith to produce improved results.

“It is clear to us that there is big expectation in the first game,” Smith said. “This is a new start for Italian rugby.

“We have got specific physical objectives we want to maintain and we have now got to get that consistency.

“The competition we are creating between players to get that jersey on the back is slowly growing.”

A slow crawl into international retirement for talismanic former captain Sergio Parisse has forced a rebuilding process up front, but Italy’s pack has shown potential.

New skipper Luca Bigi is a fine hooker, while Maxime Mbanda, Sebastian Negri and Federico Ruzza are accomplished back rowers.

Young fly-half Paolo Garbisi, who impressed at the 2019 Under-20s World Cup, and ex-Gloucester No 9 Callum Braley are lively enough to create attacking chances.

Looking at the 6/4 for the Azzurri to score the first points in this match is fair value.

France only lost out to England on points difference in last season’s title race and took them to overtime in the Autumn Nations Cup final with a fringe team.

Those exploits have raised hopes of Les Bleus now claiming top honours for the first time since 2010.

Fabien Galthie, capped 64 times at scrum-half during his playing days, has led the renaissance since taking over as head coach.

However, a relatively young side has already been rocked by some withdrawals and it is hard to judge the mood of their camp, following European Cup issues involving French clubs.

“We hope to do better than we did in 2020 by continuing to try to develop our rugby, our game, to grow the team,” Galthie said.

“It’s a young team, the average age is 24, the players have 10 caps on average. It’s a team that is going to be one year older than the team of last year.

“There’s no reason that this team does not continue to grow and to move towards the goals that we have set for ourselves.”

Despite having the hugely-respected Shaun Edwards as defence coach, Les Bleus do tend to concede plenty of points, being second only to Italy in that category last term.

Let’s finish off our Italy vs France betting tips by taking 3/1 for Les Bleus to win by just 1-12 points.