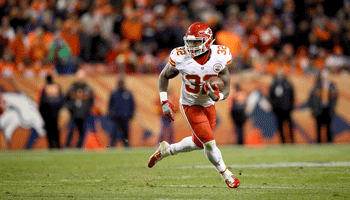 Kansas City can leapfrog Oakland at the top of the AFC West by beating the Raiders and the omens look good for the Chiefs to achieve that feat.

Andy Reid’s side have claimed eight straight victories in divisional match-ups and have a superb head-to-head record against Thursday night’s opponents.

A 26-10 triumph in Oakland back in Week 6 took Kansas City’s impressive form against the Raiders to 6-1 since Reid took charge in 2013 and they have obliged in all three encounters at Arrowhead Stadium in that time.

Add on the fact that the Chiefs have shown great spirit to come out on top in two thrilling away games at Denver and Atlanta in their last couple of games and they offer plenty of appeal here.

Reid reported after Sunday’s 29-28 defeat of the Falcons that he has a healthy squad and will be looking for the home fans to play a part in repelling the Raiders.

“Our fans are unbelievable,” declared the head coach. “I’ve said it before, they’re everywhere. We appreciate all the support we had in Atlanta. We look forward to bringing them to Arrowhead this week. It’s a Thursday night game and it’s exciting.”

To be fair, the Raiders have rallied well from that October 16 loss to Kansas City, subsequently rattling off six straight wins and scoring plenty of points in the process.

Reid feels Oakland have also addressed a few defensive problems, although they have conceded at least 20 points in each of the last five of those victories, despite facing some moderate opposition.

“They’ve made some changes defensively that have made them better on that side of the ball,” insisted Reid. “They’re playing very good all the way around in the different phases.

“They were a little down on the defensive side early on but they’ve picked up in that area. They’re flying around and making plays. And they know it. We’ll have to tweak a couple things here and there.”

Oakland may have the edge in the air going forward, with exciting quarterback Derek Carr being able to target strong wide receivers Michael Crabtree and Amari Cooper.

However, they do tend to still struggle on the ground in defence and solid Kansas City running back Spencer Ware is tipped to take advantage, giving the Chiefs the chance to control the clock.

The Kansas City faithful have had to sweat it out for their last two wins but this could be a bit smoother and the Chiefs are tipped at 4/5 to prevail by more than three points.