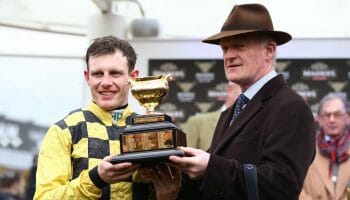 This year’s Cheltenham Gold Cup runners feature a dozen hopefuls trying to capture steeplechasing’s most prestigious prize and we’ve got a horse-by-horse guide.

The race is on to join a roll of honour headlined by such legends as Arkle, Golden Miller, Best Mate and Kauto Star, with a wide-open betting market.

Stayed on strongly to give Willie Mullins a first Gold Cup success 12 months ago, under a textbook ride from Paul Townend.

Back to defend his crown following a comfortable Tramore victory on New Year’s Day and an uncomplicated style of running means he should be there or thereabouts once more.

Stepped up on seventh place in 2017 when third last season and warmed up for another crack with a decent second to Santini on Trials Day here, but the drying ground may just go against him.

Henry De Bromhead’s charge is on the upgrade after following up victory in the valuable Troytown Handicap at Navan with a nice Grade Two triumph at Gowran Park.

Versatile in terms of tactics and it would be no surprise to see him creep into a place if everything goes his way.

Claimed a second King George triumph at Kempton on Boxing Day in brilliant fashion, beating stablemate Cyrname by 21 lengths despite being eased up close home.

The big question is whether he can cope with a slightly longer trip on this stiffer track – his stamina didn’t hold up last season when a well-beaten fifth but Paul Nicholls is adamant he is in better shape this time.

Already a proven Cheltenham performer following his 2018 Pertemps success and last year’s close third in the RSA and returns buoyed by back-to-back Grade One victories at Leopardstown.

A head win over Monalee at Christmas didn’t raise too many eyebrows, but beating Kemboy and Presenting Percy in the Irish Gold Cup makes him a major player here.

Former Welsh National winner but was a long way back in sixth in this race 12 months ago and flopped at Haydock recently following a wind operation.

Parted company with his pilot at the first fence a year ago but made amends with hugely-impressive wins at Aintree and Punchestown.

An ownership dispute delayed his return to action this term but seemed to be getting back up to speed when chasing home Delta Work last month.

Leapt to the head of the ante-post Gold Cup betting when beating Bristol De Mai in a prestigious Grade One event at Haydock in late November but was then pulled up in the King George.

Connections blamed a breathing problem for that below-par effort at Kempton, so much depends on whether a subsequent wind operation works in his favour.

Only went down by a head to Delta Work at Leopardstown over Christmas and has run well at this Festival three times before, so may attract some each-way support at a big price.

Was second in the 2017 Albert Bartlett and the 2018 RSA, plus fourth in the Ryanair Chase last term, which means Prestbury Park holds no fears for him.

Seemed to have the world at his feet when landing the 2018 RSA in sparkling fashion, having previously been a Pertemps Final winner over hurdles at this Festival.

However, finished lame in this race last term following a messy build-up and has a bit to find on this season’s form following two defeats by Delta Work.

Only sixth in last year’s JLT Novices’ Chase and was pulled up at Gowran Park a month ago, so hard to recommend.

Has always been held in high esteem by connections and certainly showed promise over hurdles when third in the 2018 Albert Bartlett and then scoring in Grade One company at Aintree.

Was edged out by Topofthegame in last year’s RSA, but had an interrupted preparation there and looks in better shape this term following a smooth warm-up win over Bristol De Mai in the Cotswold Chase here.

VERDICT: A host of solid contenders travel over from the Emerald Isle but SANTINI could be a potential superstar and is fancied to fulfil his enormous potential when it matters most.