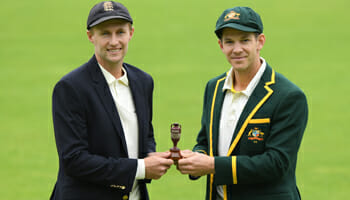 With cricket’s greatest rivalry set to be resumed in Australia at the end of 2021, we’ve taken a look back over 139 years of The Ashes history.

As one of sport’s oldest trophies, these regular battles with England have produced plenty of memorable moments.

What are The Ashes?

In 1882, the Australian cricket team won a test series on English soil for the first time in history.

This historic defeat prompted a mock obituary in a British newspaper which declared that English cricket was dead and “the body will be cremated and the ashes taken to Australia”.

The England team’s next test series in Australia became known as a quest to “regain the ashes of English cricket”.

England won the series and were presented with a small terracotta urn said to contain the burned remains of a wooden bail.

Over time, the urn became the symbol of The Ashes and one of the most important icons in cricket.

However, it does not change hands like a trophy – the original is kept in a museum and a crystal replica is awarded to the winners of each series.

Who has held the Ashes the longest?

The Ashes have been contested on a roughly biannual basis ever since, changing hands a total of 25 times to date.

The longest uninterrupted period in which one nation has retained the Ashes was from August 1989 until September 2005.

After reclaiming them on English soil, Australia were able to successfully defend The Ashes in each of the following seven series, before a 2-1 win by England saw them end a barren spell of over 16 years.

The number of Ashes series wins is finely balanced: England have won 32 to Australia’s 33, with six draws.

In the 139-year history of the series, The Ashes have been in Australian hands for more than 79 of them.

Which players have shone in The Ashes?

Both nations have five players among the 10 highest-scoring batsmen in the Ashes, but Australia’s Donald Bradman is the most prolific by far.

Widely considered to be the greatest of all-time, his tally of over 5,000 runs between 1928 and 1948 is significantly higher than anyone else in The Ashes history.

Australia also boasts the four most successful wicket-takers, led by Shane Warne’s total of 195 between 1993 and 2007, which is 38 more than any other player.

Ian Botham is the highest-placed Englishman on that list and also leads the way when it comes to catches.