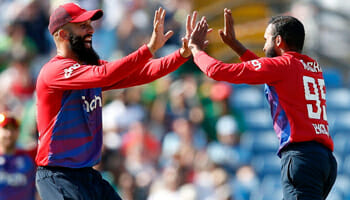 England are two wins away from becoming double world champions.

Having beaten New Zealand in a thrilling 50-over World Cup final at Lord’s in 2019, Eoin Morgan’s side are looking to go one better than in 2016, when they lost in the T20 World Cup showpiece to West Indies.

The Three Lions are backed at 8/13 to move a step closer to achieving that feat in our first England vs New Zealand prediction.

England’s four-match winning run came to an end against South Africa on Saturday, although it was a dead rubber as they still won Group 1.

But their first defeat of the tournament came at a cost, with Jason Roy suffering a torn calf.

The opening batter, who amassed 123 runs in five innings at a 30.75 average and strike-rate of 138.2, will miss the remainder of the campaign as a result.

Roy said: “I’m gutted to be ruled out of the World Cup. It is a bitter pill to swallow.

“I will be staying on to support the boys and hopefully, we can go all the way and lift that trophy.

“It has been an unbelievable journey so far and we have to continue expressing ourselves and concentrating on us.”

Roy has proved a key player in England’s limited-overs transformation over the last six years.

But, having travelled to the United Arab Emirates without Jofra Archer and Ben Stokes while also losing paceman Tymal Mills during the tournament, the team do have others who can step in.

It is Buttler who sets the tone for England’s innings and he is the second highest run-scorer in the tournament with 240, just 24 behind Pakistan’s Babar Azam.

The right-hander is England vs New Zealand odds.

The Black Caps will be looking to go one step further and win a major limited-overs trophy after losing to England and Australia in the 2015 and 2019 50-over World Cup finals.

Kane Williamson’s side finished second in Group 2, four points above India and Afghanistan and two behind Pakistan, who they lost to in their opener.

They had little margin for error thereafter and effectively had four ‘finals’ in a row, which they won against India, Namibia, Scotland and Afghanistan.

However, New Zealand’s chances will depend on how they play leg-spinner Adil Rashid, who has claimed eight scalps so far.

So, let’s finish off our England vs New Zealand betting tips by taking Evens for the Yorkshireman to take over 1.5 wickets.