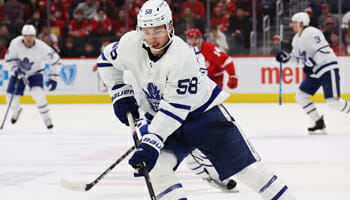 Toronto and Minnesota are both looking over their shoulders at the chasing packs in the Atlantic and Central divisions after recent results.

The Maple Leafs have suffered a hat-trick of defeats and the Wild have lost three in four, so a close encounter could be on the cards here.

Their December meeting was decided by a shootout and 4.4 for another draw after regular time appeals in our Toronto Maple Leafs vs Minnesota Wild predictions.

Toronto are still six points clear of fourth-placed Boston in their table but have fallen behind Florida and Tampa Bay in the race for top spot.

The Maple Leafs were beaten 6-3 by St Louis and 5-2 by Montreal before at least earning a point in a 4-3 overtime loss at Columbus.

Jason Spezza levelled things up at 17:54 in the third period but it took the Blue Jackets just 20 seconds to find a winner in the extra stanza.

Auston Matthews had a goal and two assists and said: “We’re leaving the rink a little bit sour, but I thought we did a lot of good things.”

Jack Campbell made 26 saves but blamed himself for not doing better with the goals conceded.

These sides rank second and fifth in terms of first-period goals scored this season, so we’re expecting early fireworks at Scotiabank Arena.

Looking at the 8.5 to break the deadlock.

Minnesota have Nashville breathing down their neck in the Central but do have games in hand over them and second-placed St Louis, even if leaders Colorado are now clear.

The Wild bounced back from losses to Winnipeg and Florida by beating Edmonton 7-3 but then went down 4-3 at Ottawa.

All-Star goaltender Cam Talbot bemoaned some bad luck in those defeats, including the Senators’ decider.

“I thought I had a good beat on it and it’s just disappointment and frustration on my part,” said Talbot.

“To lose like that with five minutes left…the bounces just aren’t going my way right now.

“But I need to find a way to make another save and at least get it to overtime.”

The visitors have looked defensively fragile, so we’re going with 12.5 for a 4-3 home win in our Toronto Maple Leafs vs Minnesota Wild predictions, with overtime and penalties included if necessary.